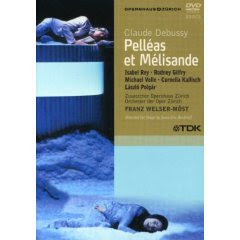 Those disliking experimental stagings /Regietheater, may opt to stay away as this Sven-Eric Bechtolf production from the Zurich Opera is an example of highly experimental Regietheater.

I am not at all certain I understand the directors intentions, but two main aspects stand out: The frosty concrete environment and the continuous presence of body doubles..

Body-sized mannequin doubles of the characters are virtually present on stage at all times. The characters move around carrying their respective doubles in wheel-chairs when they are not lying in the corners, often interacting with the body-double of themselves or others as opposed to the live characters. The frosty concrete environment is desolate. Psychologic coldness/isolation perhaps?

In the beginning Pélleas and Mélisande address their body doubles - later they address each other. Golaud mainly interacts with Mélisandes double, though Mélisande is present. The live Mélisande interacts with the live Arkel as well. The live Golaud kills the live Pélleas. In the end, the living Mélisande leaves playing with a golden ball, leaving her body double on stage. Anyone familiar with the opera not getting the psychological message?

Fine performance from Franz Welser-Möst in the pit. Isabel Rey is a fine, delicate Mélisande. Rodney Gilfry however does not have the air of the innocent dreamer if that is how one sees Pélleas, but seems an ordinary man just like Michael Volle´s excellent Golaud.

Did I like it? In theory yes, the splitting concept seemingly fine for this work. But somehow it just seemed to be spelled out to pointedly. If I understood it at all, that is. And all that frosty concrete and the wheelchairs are just so ugly to watch. I´d still prefer Peter Stein´s production from the Welsh National Opera, which also benefits from the superb conducting of Pierre Boulez.

A video clip from the staging below: