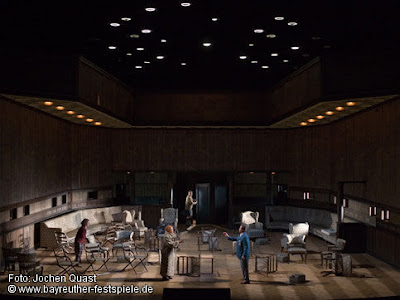 Again, any readers actually present at this revival premiere of Christoph Marthaler´s 2005 Tristan are most welcome to comment.
I will offer a brief opinion on the radio transmission:
Robert Dean Smith is a wonderful Tristan, especially on radio/video transmissions as also seen earlier this season when he stepped in at the MET for the ailing Ben Heppner. The only issue I have with RD Smith is that he occasionally is hardly audible in the house (I have heard him many times), however whether also an issue here in Bayreuth obviously I cannot tell. On the radio he was excellent.

For this revival Irene Théorin has taken over Isolde from fellow Swedish soprano Nina Stemme. It was announced that Irene Théorin was partly indisposed due to the cold, which also made the Festival Managment close the dress rehearsal ealier this week, so no comments on her performance, other than she obviously has lost a lot of weight since her 2006 Copenhagen Brünnhilde, now available on DVD and looks great (se photos below).

Michelle Breedt was a rather unspectacular Brangäne. However, Robert Holl was simply awful as Marke. In an immensely uninteresting intermission interview, he stated that 60 was the optimal age for a singer to sing Marke. For some, maybe, but generally I don´t think so.

Peter Schneider is a fine conductor, audibly well acquainted with both the special acoustics and the score, though his reading was not overly individual and relatively static.

At the premiere in 2005, Financial Times wrote of Christoph Marthaler´s staging:
An ordinary man and woman fall for each other. Theirs is an all-consuming love - compulsive, illicit and ultimately futile. It not only undermines their will to live, it poisons all the relationships in their orbit.
This is the scenario proposed by Christoph Marthaler in his new production of Tristan und Isolde at the Bayreuth festival. Wagner's great hymn to romantic love is not about sex or passion. Nor has it anything to do with metaphysics or the cosmos. No, it is about the destructive loneliness of love, an obsession that can lead only to extinction.
On these terms Tristan und Isolde is a modern story. But do we need to go to Bayreuth to experience it? Marthaler, a Swiss director who staged a controversial Figaro in Salzburg three years ago, has done his usual thing of showing opera characters as everyday types, but there was nothing revelatory about Monday's performance.
The staging received largely negative reviews in 2005: "From hero to zero", "many lamps- no enlightment", "Bayreuth's Barren Tristan und Isolde"

Reviews of the 2008 Tristan performances (selection):
AFP (English) - "There's no overwhelming passion or no electrifying eroticism. The stage, by Anna Viebrock, is all drab browns and yellows typical of the former communist East Germany or German Democratic Republic (GDR).".."Marthaler's reductionist reading is so uncompromisingly bleak that the evening dragged interminably"..[Irene Théorin] was disappointing as Isolde, sounding mostly shrill and squally, particularly in the famous closing "Liebestod".."mediocrely sung Tristan of US tenor Robert Dean Smith or South African mezzo Michelle Breedt as a rather drab and housewifely Brangaene"

Tagesspiegel - "[Irene Théorin] a voice like a hurricane ..[RD Smith and Holl] had deserved better than being trapped in Marthalers boredom". 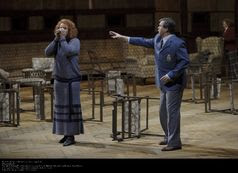 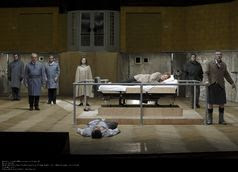 Why did you not comment on Irene Theorin? She was spectacular in the theatre - she can't have been that different on the radio Robert Dean Smith was certainly audible at Bayreuth. He isn't the world's greatest actor and this ghastly production gave him no help whatsoever. I'm also suprised at your comment on Holl. he certainly wasn't ghastly. Not on a level with Moll or Pape but ok.

To be completely honest I didn´t think Irene Théorin sounded especially great - I found her rather shrill most of the time, and completely unfocused in Act 3. Since, however, she was indisposed, in all fairness I chose not to comment upon her, leaving that to those actually present in the house (including the reviews).

In all fairness most of the German reviewers seemed to agree with you on Robert Holl as well. On the radio, he was wobbly and completely out of tune..

Virtually everybody seems to agree that the production is ghastly.

The production was certainly ghastly. How can someone listen to that score and come up with a production like that. Utterly incomprehensible.

Why do you presume, that he listens to the score? :)

I must admit to not being familiar with Marthaler´s specific working methods, but I know of several directors, who base their productions entirely on the text and as a matter of fact, tend to avoid listening to the music as much as possible.

Most of all, judged by the photographs the production looks inspired by the hopelessness of East Germany. Apparently, Marthaler was not in charge of this repremiere, as he left the job to his assistant, having already moved on to other things..

Nothing wrong with basing one's production on the text. Unfortunately the text of this opera conjures up a story of love that transcends even the boundaries of life and death - something which this tawdry mess seemed determined to ignore