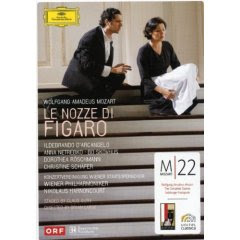 I´ve never understood exactly why this Claus Guth production of Nozze di Figaro is widely labeled one of the most controversial stagings of recent years. It does present a different take on Mozart´s opera, which may not be to everyone´s liking, but to find this genuinely shocking you´ll have to spend quite some time in the past tense...
Claus Guth´s production is an antidote to all those productions that think of Figaro as a proto-Rossini comic opera. All the light, bright and sparkling is eliminated and replaced by melancholy and poignancy. Nozze di Figaro is no light-hearted comedy, but a weighty drama of Strinberg´sk proportions.

The set consist of the interior of a Victorian house with two staircases.
The Count is neurotic and guilt-ridden and seems genuinely to be in love with Susanna. Susanna does not know whom she loves and is genuinely attracted to the Count as well. Figaro is rather introverted and distraught. In comparison the Countess appears more conventional, though she does seem to have the affair with Cherubing she is accused of having. Cherubim a character invented by Claus Guth is a sort of love catalyst following everyone around as well as sitting on the Count´s back during his aria. Occasionally the characters appear frozen in time.

In my opinion this is a superb reimagination of Nozze di Figaro. But then I´ll have to admit not really being able to sit through a conventional Figaro production either.
Claus Guth´s new production of Don Giovanni will open at this years Salzburg Festival.
Conductor Nikolaus Harnoncourt attracted almost as much attention as Claus Guth. Yes, he does set some slow tempi. But not nearly as slow as Pierre Boulez´ Wagner is fast. And not nearly controversial enough to justify the debate about it, in my opinion. And despite the tempi, he is far from the poignant Mozartian of Böhm and Klemperer that he has been made out to be. Lovers of period performances may still prefer to look elsewhere though.

There is not a single weak link in the stellar cast:

The normally very dashing Danish barytone Bo Skovhus is an agonizing and neurotic Count, earnestly in love with Susanna. Anna Netrebko´s is entirely convincing as a rather dark-toned and confused Susanna. Ildebrando d´Arcangelo is a rather grumpy Figaro. He looks great, and sings with character, which almost overshadows that fact that I really do not care for his voice. Christine Schäfer is superb as Cherubino looking exactly right, unusual casting as she is as a high soprano in this traditional mezzo part. Dorothea Röschmann is a stylistically elegant pure-voiced Countess in the most traditional interpretation of the cast.

I think it is a superb production with a superb cast, as one could had expect from the Salzburger Festspiele. I do not see why it had to be controversial.

Bo Shovhus is really awful for me, especially vocally, otherwise I agree withthat more or less.

Definitely not a Victorian house...

Thank U for sharing your info!

I don't think of myself as a traditionalist and think I'm open to alternative presentations in general but this just didn't work for me. Have just seen a video of the performance on tv. The new character of Cherubim added nothing but distracted from every, many, scenes in which he occurred (despite the unicycle!)
Fortunately the inappropriate set and costuming and everything else didn't destroy the splendid performances of the principals. One would have to declare it a success despite the best efforts of the director to spoil it.