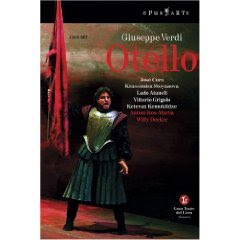 Otello. Barcelona Liceu, 2006. Director: Willy Decker. Cast: José Cura (Otello), Krassimira Stoyanova (Desdemona), Lado Ataneli (Iago), Vittorio Grigolo (Cassio). Conductor: Antoni Ros-Marbá. Further information here.
Willy Decker has a tendency of picking one major symbol around which to center his productions. In La Traviata it was a clock, in Boris Godunov a chair, in Don Carlo a mausoleum. In this Otello it is a cross as religion is the main theme of Decker´s staging.

Otello is both weak, insecure and touching. A Christian by convenience, a Muslim by conviction. The drama is about the cross-cultural and religious identity of Venice. Otello, the warrior is no hero as Venice is not his native city. On the contrary, he is simply a mercenary and traitor, hired to kill his fellow-Muslim compatriots. He has adopted the Christian faith to further his career in Venice. Towards the end, Otello symbolically breaks the cross. Having returned to his roots, he feels no guilt in killing Desdemona. Desdemona, on the other hand, who is Christian by belief, treats the cross with reverence.

The modern, minimalistic sets could have been considerably more aesthetic in the execution. However, I must admit to being rather impressed with this characterization by Decker, which for once provides new insights into the characters their motivations in one of the major repertoire operas.

Jose Cura's voice is sometimes quite strained, but his acting and commitment is captivating and he looks the part as well. The competition on DVD is however rather towering, as most will know. Lado Ataneli is not a Machiavellian Iago, but rather Otello´s jealous friend.
The major problem with Krassimira Stoyanova´s Desdemona is that she is off-pitch for most of the part and doesn´t quite seem to achieve that floating quality essential to lift off the part. Otherwise she is fine. Antoni Ros-Marbá and the orchestra play well, though not riveting.

As a modern Otello it works rather well, though I find the Flimm/Barenboim Otello (also modern) more captivating.