Wozzeck DVD: Chéreau with Barenboim and Waltraud Meier from Berlin 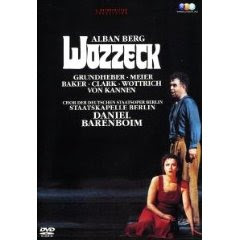 A co-production with Theatre du Châtelet (Paris) and intitially Lyric Opera Chicago (eventually backing out due to monetary concerns), this Wozzeck was recorded live April 1994 at the Berlin State Opera.

The sets by Patrice Chéreau´s long-time collaborator Richard Peduzzi are more colourful as well as more rigid than otherwise seen from his hand (From the house of the dead, La Scala Tristan, Bayreuth 1976 Centenary Ring). The stage is basically black and empty with tastefully coloured geometrically shapes imitating houses/imaginary spaces sliding back and forth. The light effects are simply stunning, varying from spotlights following the individual singers to contrasting colours highlighting certain portions of the stage. The timeless beauty of the staging is immense.

The historical, political and criminological contexts of Wozzeck clearly do not interest Patrice Chéreau. Wozzeck is a human drama. Some comments from Chéreau in the accompanying booklet would have been most appreciated.

Chéreau´s trademark is the detailed analysis of the text and the engaging direction of the singers. In this respect the cast was ideal. Mezzo cum soprano Waltraud Meier is a powerfull sung as well as very humanly acted Marie. A normal woman, searching for happiness, who turns to the tambourmajor in desperation over Wozzeck. Guilt, desperation as well as love for her son are key words. Franz Grundheber´s Wozzeck is the victim. The Captain and the Doctor are the crazy ones, excellently performed by Graham Clark and Gunther von Kannen reliving their previous Mime-Alberich squabbles from previous Bayreuth Festival seasons.

The young Roman Trekel and Endrik Wottrich may be seen in smaller parts as well.

Another fine modern version on DVD is Calixto Bieito´s production from Barcelona, while those opting for a more traditional staging may prefer the Claudio Abbado conducted Dresen Vienna production. Peter Mussbach´s Frankfurt production is visually impressive, but musically not on the same level as the above mentioned.