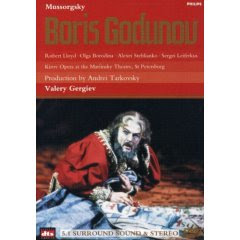 
I have seen and heard Boris Godunov numerous times, and not two performances have contained the exact same music. Apart from the myriad of different more or less authentic versions, there are several orchestrations to chose from as well. Even the accompanying booklet doesn´t state exactly which version we see on this DVD, but after some detective work (including actually watching the DVD), I conclude this to be the revised 1872 version in Mussorgsky´s own orchestration. The only other contemporary Boris Godunov DVD (Decker´s production with Matti Salminen from Barcelona) is of the original 1869 version (also Mussorgsky´s orchestration). Rimsky-Korsakoff´s beautiful and glittering orchestration seems to have gone more or less out of fashion recently in favor of Mussorgsky´s vastly more raw and unfinished, but entirely unique orchestral sound.

The main difference between these two versions is the inclusion of the Polish scenes (with Marina Mnishek) in the 1872 version which furthermore end with the Kromy forest scene, as opposed to the 1869 version ending with Boris´death and furthermore including the Cathedral scene with Vasilyi the blessed. Further information on the exact differences between the versions and the Boris Godunov performance history, as well as historical sources here.

This is Russian filmmaker Andrei Tarkovsky´s 1983 production, originally from Covent Garden where it was conducted by Claudio Abbado. At the St. Petersburg Mariinsky Theater, the place of the original Boris Godunov premiere, Valery Gergiev is leading a performance cast entirely with Russians, with the not unimportant exception of Robert Lloyd as Boris in 1990.

Tarkovsky has created, not surprisingly, a very filmic Boris Godunov. With a unifying sparse tableau, the movements of the masses in colourful, traditional costumes seem almost epic. And in the background, the eerily green ghost of Dmitri pop up at various decisive points.

The production concept in brief: Boris as the wounded soul. According to Tarkovsky´s notes this is a "drama of conscience" where Boris "has a terrifying premonition that his own son will have to pay for his sins". Everyone else seems to have to pay as well, as all drop dead at the end of the opera. However, the production tends to be too glossy and self-conscious, even the suffering and poverty is glorious and the peasants are shining.

Robert Lloyd by all means deliver a superb performance conveying the anguish and writhing torment of the Tsar. However, his peculiar way of nasal singing simply does not appeal to me, and while his performance understandably may count among the highlights of this set for others, for me it is a major detraction.

I found the absolute highlight to be the superb Polish scenes between 27-year old Olga Borodina and Sergei Leiferkus. Olga Borodina may not be a great actress and she may not offer particular insight into Marina´s motives, but the voice this early in her career was just incredible with an indescribably smooth and silky beauty. Quite possibly the finest performance of her career.

Valery Gergiev is either on or off. When he is off, he is simply awful. When he is on, he is magnificent. Which it will be unfortunately is entirely unpredictable from performance to performance. In this Boris Godunov, fortunately he is on (admittedly he is rarely off in Mussorgsky and Prokofiev, though).

Is this the Boris Godunov DVD to own? For some, it may well be. Personally I prefer Willy Decker´s production from Barcelona Liceu, which comes closer to the essence of Boris as well as featuring the riveting Boris of Matti Salminen.
Olga Borodina as Marina Mnishek:
The bottom line (scale of 1-5, 3=average):

I've seen Borodina and Leiferkus in the Polish scene during several revivals of Boris at the Met and these have been by far the most memorable (perhaps the only really memorable) moments from Boris that I've experienced live (I haven't seen it anywhere else). It is in this context also that Borodina has, in my experience at least, been at her very best, not only magnificent vocally but also dramatically.

While she's also almost certainly the best Eboli and Carmen I've heard (the latter with Pape as Escamillo - I'm sure your sorry to have missed that one - and you would be right to be) she was conspicuously lacking in temperment for those roles as well as other I've heard her in.

Don´t even mention that..In that context it´s absolutely appalling that the Berlin Carmen with Domashenko, Villazón and Barenboim is recorded with an Escamillo, whom I´ll do a favour of not mentioning as he both looks and sings like an adolescent. Especially when you know who is in the house, so to speak..

I´ve never seen Borodina live, and since she claims that most of her male colleagues are boring and has gotten herself banned from both the Vienna SO and Covent Garden, I will most likely never see her on stage.

As you probably know, current fashion is that Boris be performed in the 1869 original version without the Polish scenes, however they were obviously there in the Vienna production I saw last year with Nadia Krasteva after they kicked Borodina out due to some incident over a Rossinin opera the previous season, in which she was replaced with Agnes Baltsa, I believe.

The less said about the casting of some DVDs the better. As a for instance there is a Nozze DVD of Krchschlager's Cherubino with a cast I'm not too familiar with (I've heard only one of the other singers and she left a great deal to be desired) but respecting which I have serious reservations. On the other hand I've seen her in the role in three other productions which were superbly cast (including Furlanetto's Figaro - rather late in his career but still probably the best I've heard). (One of them was broadcast so I hope that something will be released eventually).

It is shame that Pape's Escamillio has escapted capture but I would certainly hope the same will not be the case with his Wotan, Philip and Boris

I don´t think the last word has been said about that...