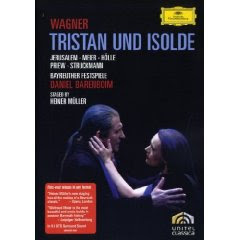 Anyone still doubting whether Daniel Barenboim is the greatest living Wagner conductor are invited to start here.

In brief, Daniel Barenboim´s performance with the Bayreuth Festival Orchestra in this performance of Tristan and Isolde is simply overwhelming. He surpasses even the most excessive expectations, even from those who, like me, have heard his Tristan on numerous previous occations. The sheer power, the magnificently disposed lines, the passion.

I have never heard his Tristan quite as glorious as here in Bayreuth 1995. Easily the best conducted of all available Wagner operas on DVD. And the best recorded Wagner performance from Daniel Barenboim as well (including the CDs). Well worth owning for that aspect alone.

This 1993 Bayreuth Festival production of Tristan and Isolde was initially to be directed by Patrice Chéreau, whose cancellation led to the appointment of Heiner Müller, widely acknowledged as the most important German dramatist in the 20th century after Bertold Brecht. This Tristan and Isolde was his first and only operatic production as he died in 1995. The production was seen at the Bayreuth Festival from 1993-9, with the 1993 premiere featuring role debuts for both Waltraud Meier and Siegfried Jerusalem as Isolde and Tristan, respectively.

Truth be told, Heiner Müller´s staging, though beautiful and eerily aesthetic, is too passive for my taste. But admittedly, he does provide the ideal static background for the glorious orchestral sound to be cast upon, virtually unreflected.

Heiner Müllers approach to Tristan was highly intellectual and non-sentimental, explicitly aiming to rid the work of all hints of romanticism or overheated passion. But aren't Tristan and Isolde so deeply in love that they can only come together in death? he once was asked. "Nonsense, Romanticism in the worst sense. Nobody really yearns for death," said Heiner Müller.

Together with set designer Erich Wonder and costume designer Yamamoto (a Japanese fashion designer) they created a static and minimalistic production centered on geometrical shapes - cubicles and rectangles - with superimposed light effects projecting various colours and forms according to the changing moods.

The colours change from the golden-red spectre of Act 1 over the blue in Act 2 to the green-deep grey of Act 3. A closed rectangular space serves as the basic setting, being only slightly modified from Isolde´s 1st act ship space visualized as a sunken rectangle in the golden-red declining floor, to Act 2´s eerily misty blue space (graveyard?) covered with silvery breastplates, to the desolate shattered concrete spread out on the floor in the otherwise naked room of Act 3.

There is virtually no physical contact between the singers (including the love duet) who move in parallel orbits if not assuming frozen positions in artificial angles. The impression of stylized Japanese theater is hardly coincidental and emphasized by the colourful geometrical artworks projected during the preludes.

With such a tremendously brilliant orchestra there simply is no real need for scenery. But some attempts at creating drama on stage would nevertheless not have been ill-placed.

The DVD, as always at the Bayreuth Festival, was recorded in front of an empty theatre, though the audible warming-up of the orchestra alludes to a live performance, which it is not. Sound as well as picture is of very high quality and the slightly grained close-up shots are due to the use of transparent curtains to maximize the light effects.

Waltraud Meier is a truly glorious Isolde, this however not being the ideal production to showcase her immense acting skills and charisma. She seems constantly to restrain her expressions (undoubtedly at Heiner Müller´s instruction), and one wonders if she really feels at home in this production? To fully appreciate her radiance, one has to wait for the Barenboim/Patrice Chéreau production from La Scala. Vocally, however, she has never been better, and nevertheless manages to infuse some much-needed drama into the production. By a wide margin the leading Isolde on DVD.

Siegfried Jerusalem is also by a large margin the best Tristan on DVD, for once looking believable next to Waltraud Meier. If just the staging had given them more opportunity to interact dramatically.

In the supporting roles, both Uta Priew and Falk Struckmann acted and sang well (Struckmann not without a slightly irritating dryness to his voice). Matthias Hölle was actually quite fine as King Marke, not levelling with The true King Marke obviously, but nevertheless convincing. I wonder what ever happened to him, who seemed to be everywhere in the mid-90´s, as he must still be quite young?

Compared to Daniel Barenboim´s previous 1982 Bayreuth Tristan DVD in Ponnelle´s production, this performance is even better conducted. Which Tristan and Isolde DVD of these two to go for, I´d say is largely matter of taste. With the most obvious alternatives being the Lehnhoff Glyndebourne production with Nina Stemme or the Konwitschny production from Munich, also with Waltraud Meier. Until the Barenboim/Chéreau 2007 production from La Scala is released, that is.

Watch this to listen to Daniel Barenboim´s glorious conducting without being disturbed by irrelevant stage action. And to have the ideal Tristan and Isolde combination in Waltraud Meier and Siegfried Jerusalem. Strongly recommended as my personal favourite.