Trapped in the dark middle ages with no escape: Vienna Lohengrin with Claudio Abbado and Placido Domingo on DVD 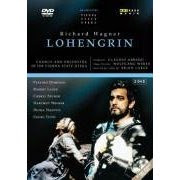 Traditionalists may initially be uplifted by the though that director Wolfgang Weber takes all Wagner´s so-called intentions including the 10th century Lohengrin setting very serious. Beware, the optimism may be short-lived, though: The dark middle ages have never been more genuinely dark and medieval than in this Vienna staging...

The staging "allows the singers plenty of room to develop" - indeed, as stage direction seems absent from this production. Though the director may disagree, dressing Ortrud in red is not enough to create compelling drama...

In brief: This staging is unbearably boring and tedious. Trapped in the dark middle ages with no escape indeed...

Once and for all: I do not care about Plácido Domingo´s German diction when he sings and acts like he does here. Though, technically speaking, his diction is excellent. His German is not. I´ll spare readers a lenghty explanation of just why Plácido Domingo is the best tenor in this repertoire for as long time back as I can remember, but keywords include: Legato singing, dramatic presence, beautiful barytonal glow, convincing interpretation.

Cheryl Studer is a vocally a very fine and moving Elsa, though rather monodimensional on stage. However, the Queen of monodimensionalism is Dunja Vejzovic´s very passive Ortrud, who constantly looks bored more than anything else. Matched by the slightly more energetic, though wooden Hartmut Welker. Robert Lloyd´s nasal singing frankly irritates me as Heinrich, and overshadows whatever additional qualities he may have.

Claudio Abbado conducts with transparent beauty and myriad of details. In the perfect world he would have added more energy and intensity as well. And chosen another stage director..

In short: Not recommended despite excellent performances from Domingo, Studer and Abbado.

Plácido Domingo and Cheryl Studer, 3rd act confrontation (the highlight of the DVD):

I'm disappointed that, after rating Domingo, Abbado, and Studer so highly see fit to rate the DVD overall at 2.
Do you know of a better performance on DVD than that of Domingo or Abbado?

Compare with your reviews of the Bayreuth 1982 Lohengrin or the Baden-Baden which by your own assessment have neither a principal singer or conductor to match the above, yet you rate the overall performances much higher.

Over the long term, and for repeated DVD viewing, I find that the quality of the main singers and the conducting far outweighs that of the staging. Yet this example gives me the impression that you are reviewing them in the way one might assess a one-time visit to a live production, where the novelty of a particular staging tends to play a more important role in the impression created.

I will be very surprised if the Domingo/Abbado version does not long outlast the other two in the catalogue.

"Do you know of a better performance on DVD than that of Domingo or Abbado?"

" you rate the overall performances much higher."

As a DVD, I do rate them higher since, in my opinion, the overall visual element weighs in heavily here. If I want to listen to Domingo and Abbado, I just listen to their recording. But what a shame that they have not recorded this in another staging...

"Over the long term, and for repeated DVD viewing, I find that the quality of the main singers and the conducting far outweighs that of the staging."

Then, this is where we fundamentally disagree. I very much review these DVDs for their quality in the long run, being familiar with the Bayreuth and Vienna performance since they were released on video. And this is where the staging weighs in heavily for me. If I feel like closing my eyes, as I do here, I do not see the point in buying the DVD.
To be completely honest, I do not know of any DVDs (Wagner) that equals the CDs in my collection. I listen to a Tristan CD 20 times for each time I watch one of my DVDs.

"I will be very surprised if the Domingo/Abbado version does not long outlast the other two in the catalogue."

I agree. The main reason being I believe more Wagnerians agree with your opinions on the music vs. staging balance in DVDs than with mine. Plus, this is Domingo´s only Lohengrin on DVD (and Abbado´s as well) which will weigh in heavily for many potential buyers.

"If I feel like closing my eyes, as I do here, I do not see the point in buying the DVD."

I understand from your blog (wonderful by the way, and churlish of me not to have complimented you on it earlier) that you are a fluent German speaker. But for some of us who aren't, the CD with the fiddly miniature libretto open on our laps is increasingly a substitute merited only by the most outstanding legacy recordings.
In this respect, I suspect a number of fellow-opera lovers are expecting DVDs to both dispense with the inconvenience of the CD experience while enabling a much more complete operatic experience.

It may be, as you suggest, that Wagnerians are particularly prone to emphasising the musical over the visual aspects of a production. But it may also be that many have been weaned on LP or CD recordings and are, in a sense, preconditioned to respond in this way across the spectrum of opera composers.

It's possible that, with the passage of time, our priorities will shift. But I have a niggling doubt. Laserdisc was a very popular format for opera prior to DVD and it doesn't seem to have greatly influenced this consumer preference.

Perhaps a new generation, who will have even less tolerance for the inconveniece of opera on CD, will respond differently.

Those are good point, though I am still not sure I agree with you.

Yes, I do speak (or at least understand) both German and Italian fluently, but that does not always help me when listening to records, believe me.

But for arguments sake, let´s take Khovanschina (I do not understand Russian): Is it more inconvenient to listen to a superb recording and look in the textbook than watching a musically superb DVD and having to look at some dreadful decorations while studying the subtitles? I don´t think so, and would prefer the CD anytime. Truth be told, most of the time I just listen to CDs I just skip the booklets, resulting in me knowing Khovanschina by heart (musically), while I do now the text, but not particularly well.

Even in this case, I´d prefer an interesting staging to look at, since the alternative (the CD) is rather good.

I´ll predict that audiences will be even more attentive to the visual aspects of opera in the future.

Which may seem a strange argument for me to make, since my main interest in opera has always been the music and I actually prefer CDs to DVDs, mainly watching the DVDs out of curiousity. Very few DVDs stand the test of time, imo. Barenboim´s Ring is one. His Tristans as well.