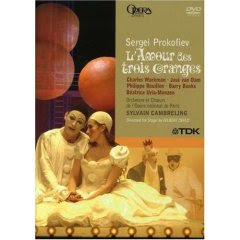 A true fairy tale for adults: A hypochondriac prince, only to be cured by laughter, is bewitched by Fata Morgana to fall in love with three oranges held by a mighty sorcerer...

Gilbert Deflo has created an exceptionally successful staging mixing elements of circus with commedia dell´arte. Groups of spectators (the tragic, the comic, the ridiculous) comment on the action and occasionally intervenes jumping in from the sidelines at crucial points. Such as to save the life of the last princess after the two previous princesses have died from thirst.

The melancholic and hypochondriac prince is Pierrot. The last orange princess turns out to be Columbine. The King of Clubs is a clown with a fairy-tale crown, chinese beard and Harlequin staff...And so on. Outstandingly stylish, inventive and entertaining.

On top, the music of Prokofiev has an immense theatrical quality and energy, though probably not widely known apart from the famous march.

Charles Workman is the melancholic prince, Béatrice Uria-Monzon is Fata Morgana. In the other leads José Van Dam, Phillippe Rouillon and Barry Banks are to be seen. All outstanding.

Clip from the start of the opera where the plot is introduced (David Bizic sings):
The bottom line (scale of 1-5, 3=average):

Everyone: 5 as this production clearly is a team effort