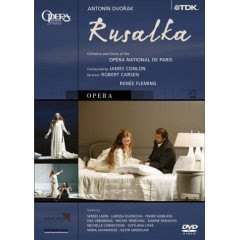 For a DVD recommendation of Rusalka, this is an easy choice being the only version available in the original czech language.

The storyline in brief: Rusalka, a water nymph, falls in love with a mortal Prince. To marry him she has to give up speech, and furthermore she will have to return to the un-dead, should her Prince reject her. Which he does, attracted by a Foreign Princess. The Prince then regrets this unlucky choice and returns to Rusalka, now an un-dead water nymph, eventually choosing to die in exchange for a kiss. Except that in Robert Carsen´s staging the ending is a happy one, in which the the Prince and Rusalka are united.

Robert Carsen´s very beautiful (as always) production emphasizes the duality of the mortal and fairy-tale worlds. In Act I, the stage is vertically symmetrical, reflected from the bottom of the enchanted lake. In Act II, the symmetry of the set is left-right within the palace of the Prince, applying body doubles as well.
Though the main concept thus is relatively clear, explanatory notes by Robert Carsen nevertheless would have been much appreciated. But potential buyers may note, this is not a traditional setting. Nor is it wildly experimental, though.

The almost Wagnerian power of Dvorak's score is convincingly conveyed by James Conlon.

Futhermore, the cast is virtually ideal, both vocally and dramatically, with no weak links: Sergei Larin has the necessary heft as the Prince, though he comes off rather stiff on stage. Eva Urbanova is almost frightening as the dominating Foreign Princess, Larisa Diadkova is a demonic Jezibaba, Franz Hawlata a noble Water spirit.

And finally Renée Fleming as Rusalka, one of her best roles. She is in splendid voice and whether or not one cares for her particular style of singing (more mannered than in her earlier years, but less mannered than she can be), her portrait of Rusalka is genuinely moving and of an artistic depth that stays with the viewer for quite a while.

The only alternative to this DVD is David Pountney and Mark Elders English language version from the English National Opera 1986, which I cannot recommend.

Renée Fleming: Song to the moon

Glad you liked it too. I LOVE-LOVE that Rusalka

I just watched the Paris DVD and Yes, the singing and orchestral playing really are wonderful.

Fariy tales can often represent the human foibles and hangups we often have as we grow up and become worldly, but as Freude is supposed to have said, sometimes a cigar is just a cigar.

I was dissapointed and put-off by the crude sexual images repesenting the "modern" world conflicting with the libretto and music that clearly are rooted in the time they were written. That would be another example of the duality discussed on this page by another poster.

I didn't like it. Perhaps if I had the advantage of seeing this opera performed frequently I would welcome a different POV, but at least in the USA that opportunity doesn't arise.

Dvorak is not Wagner and cannot hold up to too much symbolism.

Hi, Jim. this production is very tame compared to some of the deconstructionist nightmares perpetrated on poor "Rusalka" elsewhere! You would love the current Glyndebourne production which is still very much a fairy tale but with some very dark scenes. I found it superb and hope it will be issued on DVD next year.

I have to disagree. I found the production ugly as well as nonsensical (while the Munich version I found only ugly). I also cannot stand la Fleming in this part; she simply can't sing it correctly--her Czech is awful and her mannerisms stretch and shrink the music uncomfortably for my ears.