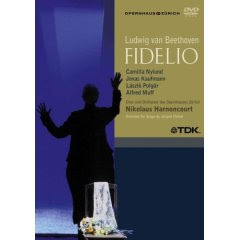 Fidelio must be an exceptional inspirational source to director Jürgen Flimm, as this is his second DVD production of Fidelio in almost as many years, this time from the Zurich Opera 2004, while his first Fidelio DVD dates from the Metropolitan Opera 2002.

While his MET production is set in an unspecific 20th century police state, the Zurich production is more abstract, with no apparent political messages. The sets are simple and blue, changing to yellow (the colour of optimism, surely) in the final scene. A wooden table is virtually the only requisite on stage. Costumes are approximately dated to the early 19th Century. The production is rather aesthetic with a cool silver glow to it, however if Flimm intended to communicate any profound messages (or just any messages), they have escaped me.

Camilla Nylund has an essentially lyrical and rather small voice with a silvery sheen. She boths looks and acts well and is well-matched with Jonas Kaufmann´s Florestan. However, mainly due to the lack of dramatic expression in her voice, I ultimately found her Leonore rather uninteresting.

Not so with Jonas Kaufmann, who thanks to his solo contract with Decca now looks on his way to tenor-stardom. Fully deserved as well. One of his trademarks of course is, that he is rather good-looking. But more importantly, he is an excellent actor with the ability to identify completely with the character on stage. His voice is rather dark and expressive, and he sounds slightly strained at the top, which however does not detract from his performance at all. In Fidelio, he basically has only one aria to sing, and that he sings well. If I were to bet on only one of the younger tenors, I´d put my money on him.

There were no weak links in the supporting cast.

I found Harnoncourt´s tempi on the slow side, but more importantly his approach to Fidelio seemed rather light-hearted, which some may prefer. Not me, though.

This seems a DVD for Fidelio afficionados or Jonas Kaufmann fans. For those only in need of one version, I´ll recommend Flimm´s superb staging from the Metropolitan Opera with Karita Mattila, René Pape and Ben Heppner which for 2/3 of the leads is better cast (I´d take Jonas Kaufmann over Ben Hepper anytime) as well as having the sumptuous full-scale Beethoven of James Levine.

The fanbase is growing!

I recently heard Jonas Kaufmann in a Fidelio he did to replace Seiffert who was ill that day, spontaneous replacement and happy coincidence to be there.... he was even better than in the recording! His Gott at the beginning absolutely filled every corner of the house, amazing!

I am responding to your review of 2008, four years ago, but I just found this by chance and I very much agree with your evaluation of this DVD although I don’t think it is primarily for the fans of Kaufmann (I’m one of them). I saw this entire DVD some time ago, but appreciated to see this segment just now. OMG Kaufmann looks like Jesus Christ in The Garden of Gethsemane. Not that I want him to act like Jesus – I’d much rather have him stay human and sing.

I have CD of Fidelio, JK, Nina Stemme, Lucerne Festival conducted by Claudio Abbado. I have not compared it with the 2008 DVD, but I think I like the Abbado CD better. I have to play it a couple times more to really appreciate it. But I think Stemme’s voice is fully developed, mature, warm, and strong, convincingly Leonore. Camilla Nylund made me think of a very well-trained and talented conservatory student (graduate level) and I thought she was rather cold. In the DVD, JK was really convincing as Florestan, weak and could hardly stand up after he was released, but he was acting very affectionate and happy, whereas Nylund was stiff and didn’t seem to know how to show her happiness and affection. I guess she needed some more years of experience.
Thank you anyway for the interesting review and the YouTubes.

Thanks for this insightful post. I have heard Camilly Nylund on several occasions, incl. on several DVDs, and what always strikes me about her is her somewhat lack of expressivity, both acting but as well vocally. I am not sure she will learn to be the warm expressive Leonore with time - it seems simply not her style. That said, she has developed considerably over the past years.