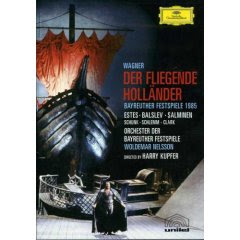 This DVD contains one of the true classics among modern Wagner productions: Harry Kupfer´s production of The Flying Dutchman from the Bayreuth Festival 1978-85. Indeed it is one of the most imaginative, fascinating and well-conceived stagings of any opera available.

First of all Harry Kupfer´s core concept is simple as well as original, and is furthermore well in agreement with Richard Wagners text without having to rely excessively on the imaginative powers of the audience: The entire drama of the Flying Dutchman simply takes place in Senta´s imagination.

The scene is set in a claustrophobic and traditional Norwegian fishing community of the 19th century. The dreamerish Senta clearly does not belong here among these down-to-earth people.

A spiral staircase with a window on top overlooks the stage, and already during the prelude the concept is clear: Senta´s fascination by a picture of the Flying Dutchman on the wall slowly develops into a trance. When her father subsequently arrives with a wealthy suitor, in Senta´s trance-like state she believes this to be the legendary Dutchman, while it in fact it is an ordinary man. The imaginary Dutchman as well as his ship lifted by two giant hands slowly emerges from the background, and the duet between him and Senta is sung with the Dutchman firmly in the background, as if he was not really there.

The masked and white-clad townspeople of the imaginary wedding are subsequently swallowed by the Dutchman´s crew. In the end Senta, in her exalted state believes to save the Dutchman by following him into eternity - in reality she commits suicide by jumping out the window next to the spiral staircase and is found lifeless on the ground by the silent onlooking community. A dreamer who did not belong there.

The concept works almost to perfection and Harry Kupfer´s trademark, the detailed direction of the singers, cast as much for their acting as their singing capabilities is not betrayed. Though 30 years old, this is still highly engaging music theater, though the production is slightly dusty, especially compared to Kupfer´s later staging from 2001 at the Berlin State Opera, centered around the same concept.

The singers are virtually ideal: Lisbeth Balslev convinces entirely as the neurotic, dreamerish Senta opposite Simon Estes noble Dutchman. Manfred Schenk is also well cast in the smaller part of Erik. The young Matti Salminen is an outstanding and authoritative Daland. While Woldemar Nelsson may not provide the most imaginative reading, it does not detract significantly from the overall picture either.

For those wanting a DVD of The Flying Dutchman, this is the one to have. The only competition on DVD is the outdoor production with Franz Grundheber, Hildegard Behrens and Matti Salminen from the Savonlinna Festival (also recommended) and the Kaslik/Sawallisch studio production with MacIntyre/Ligendza (not recommended, as I find it oldfashioned, dusty and unengaging).

The final scene from the present Kupfer Bayreuth production:

I would hesitate to recommend the Savonlinna DVD. Behrens, Grundheber and Salminen are excellent but the guy who did the filming made a curious choice. There is never -or almost never- an overall view of the stage and the singers are always filmed at very close range. It is a pity because the width and impressiveness of the stage could have given plenty of opportunities to a better-inspired film-director. There is really nothing to say against the musical interpretation, but when you buy a DVD, you are supposed to have an interest in what there is to see. And in this case, it is disappointing. And anyway the production in itself is much less interesting than Kupfer's.

Oh you are completely right. Haven´t seen the Savonlinna for quite some time and I completely forgot about those cameras. Was primarily considering the singing, which I thought was fine. But it is nowhere as interesting as the Kupfer production, completely agree with you.

I think that it's one of the best performances of the flying Dutchman, I've got the double live CD from Phillips.

I thought Matti Salminen stole the show. His Daland was more interesting, scarier too, than Simon Estes' overblown Dutchman.

For me the most central figure in this staging, was Lisbeth Balslev. Musically she might have not dominated this performance, but as an actor and regarding her stage presence, I believe, she was unsurpassed.
This whole production, for me, is Senta. The others were far less memorable.

I'm very much in accord with your comments but according to my copy Erik is played by Robert Schunk.