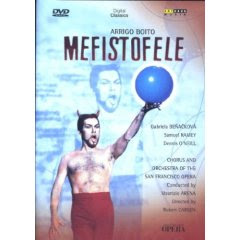 Samuel Ramey must be one of these admirable artists not caring about their legacy. Because if he did care about his legacy, he would retire from the stage and thus avoid being remembered for the vocally disgraceful performances of recent years, which unfortunately do tend to overshadow the memories of his previous glory. Operagoers, who tend to live in the past have an obvious advantage here....

Arrigo Boito is mainly known as Verdi´s Otello and Falstaff librettist and this 1868 Mefistofele is his only opera and one of several based on the medieval Faust legend.

Boito follows Wagner´s example of writing his own libretto, for which he leans heavily on Goethe: God challenges the Devil (Mefistofele) for Faust´s soul, which Faust subsequently sells to the Devil in exchange for a moment of complete happiness. Margherite falls in love with him and eventually kills both her mother and baby, but ultimately rejects Faust, which saves her soul. Mefistofele then conjures up the image of the eternally beautiful Helen of Troy. Faust declares himself completely happy with her, forfeits his soul to the Devil, but in a move I´ve never entirely understood God intervenes and saves his soul.
I almost feel sorry for the poor Devil. Didn´t he win Faust´s soul fare and square? I mean, nobody exactly forced Faust to sell his soul. Though God did start the whole affair by challenging Mefistofele in the first place. As they say: The Lord does indeed work in mysterious ways...

Some of Boito´s music may not be exactly first rate, but the beauty of the choral scenes at the beginning and end is immense.

As said, I had almost forgotten how glorious Samuel Ramey really was in his prime, as in this 1989 Mefistofele. This is really how he should be remembered. Samuel Ramey is simply a magnificent Devil. Glorious voice. Superb presence. Sarcastic, sophisticated, witty. And quite likable as well. Generally, I rather like these Devils (Gounod´s and Berlioz´ as well) as they tend to be vastly more interesting and attract vastly more interesting singers than the often tedious Faust characters.

Is Faust just a boring character or is it Dennis O´Neill who is boring? Both I suppose. Gabriela Benackova does not exactly set fire to the stage either despite a very beautiful voice.

Robert Carsen had his international breakthrough with this production in 1988 and had not quite developed his secure grasp of evocative minimalism combined with innovative staging concepts. Some of the scenes, most notably the opening and final scenes, with masked ghosts appearing on balconies were superb. As was Mefistofele appearing from the orchestra pit for his opening monologue. Other scenes seemed rather static and overstuffed.

This is currently the only Mefistofele on DVD.