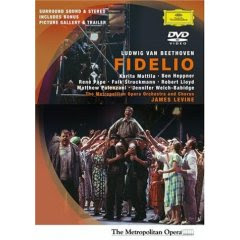 Jürgen Flimm´s new production of Fidelio was considered controversial at the Metropolitan Opera premiere in 2000, for reasons I do not entirely understand, as I find it quite traditional in both concept and execution.
Agreed, the action has been transferred to the 20th century, set in an unspecific police state, handguns are seen, and A President, as opposed to a A Minister arrives at the end, but basically the well-known storyline is followed from A to Z, leaving any controversy entirely at the superficial level. The walls may be grey, but after all it is a prison. On the other hand, the entire cast is colourfully clad.

There is not one single weak link in this excellent cast of singing actors/acting singers:

Finnish soprano Karita Mattila virtually shines as Leonore in a part that seems written for her and furthermore this production brings out all her strengths as a performer. Vocally, the part lies perfect for her voice, much of it in the middle register, where she has the necessary weight and her high Bs are rock solid. Her slightly awkward/shy air on stage furthermore is to her advantage in this trouser role, which she manages to pull off vocally while at the same time remaining believable on stage. Furthermore she remains true to Beethoven´s phrasings and the classical style (as opposed to the Wagnerian floating style applied by others in this part). I cannot imagine a better casting of this role.

German bass René Pape is vocally perfect as a curiously disorientated and disheveled Rocco, with a completely different air about him on stage than usual, as well as applying an edginess rarly seen in the part. Falk Struckmann´s voice basically gives the impression of a character-baritone, but as Pizarro, he is effective. Ben Heppner delivers his one aria in this one-aria role satisfying from a vocal point of view, but a romantic hero he will never be, even less a convincing actor.

Fine performance from James Levine and the orchestra, with considerably more density and edge than he applies to Wagner, though the tempi tended to be on the fast side (for him).

This Fidelio production is still traveling the world- last season it was seen at the London Royal Opera and next season it moves to the Barcelona Liceu. On both occasions with Karita Mattila as Leonore.

Strongly recommended as the Fidelio-DVD, if any, to own as well as being one of the best DVDs to be released from the Metropolitan Opera.

Video clip from this production "Mir ist so wunderbar" - Quartett with Mattila, Pape, Polenzani and Welsh-Babidge: