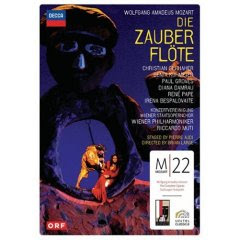 2006 was the 250th anniversary of Mozart´s birth and in Salzburg all his 22 operas were staged and subsequently released on DVD as Mozart22 by Decca.
For The Magic Flute, being one of the cornerstones of Mozarts output, a successful production for this commemorative year obviously was crucial. And in fact Graham Vick staged a new Salzburg Magic Flute with virtually the same cast, orchestra and conductor in 2005. However, this production (featuring René Pape´s Sarastro as the bad guy) apparently was too controversial for the Mozart anniversary year and with short notice Pierre Audi was asked to restage his production of The Magic Flute dating back from the Amsterdam Opera 1995.

As always, Pierre Audi´s production is very aesthetic. The sets were by Karel Appel (Dutch painter and co-founder of the Cobra movement, deceased just before the 2006 Salzburg Festival), heavily influenced by African tribal arts and culture as well as being vividly colourful, exotic and childlike. Huge tribal-art sculptures and colourful spirit-like apparitions in paper maché gives the production a distinct air of voodoo and black magic. The Magic Flute as a sort of spiritual operatic ancestor, Pierre Audi seems to think. And it is quite fascinating to watch s well..

On top of these imaginative sets, a mostly ideal cast had been assembled:

René Pape, repeating his magnificent Sarastro (that gave him his initial breakthrough here in Salzburg with Georg Solti in 1991) for I don´t know which time, looking slightly bored, perhaps as a result of his (quite stupid-looking) white face paint.
On Diana Damrau´s Queen, I realize I may bring forward a minority opinion: I simply do not care for either her voice (which I find dry and uninteresting) or her stage appearance (which I find irritating). But agreed, she is not boring and does hit the notes. On the other hand I found Genia Kühmeier´s Pamina superb with clear, beautiful and (most crucial in this part) unsentimental singing and acting, probably the best Pamina on stage today. German reknowned lieder-singer Christian Gerhaher made a fine, not overly ridiculous Papageno next to Paul Groves rather anonymous performance in the thankless role of Tamino.
Thankfully, no Mozart light or period approach from Riccardo Muti in a well-balanced, straight no-nonsense reading.