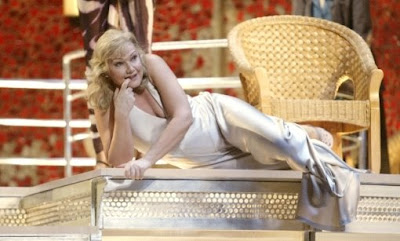 Karita Mattila´s career initially centered around Mozart (Pamina, Countess, Donna Elvira) with debuts at Covent Garden (1985) and the Metropolitan Opera 1990 (Countess). A heavy performance schedule during these early years led to a vocal crisis requiring surgery on her vocal chords in 1992, one of the reasons she currently limits her annual performances to about 50. Karita Mattila´s career seemed to have reached a plateau in the early 90´s, however in the mid-90´s she re-emerged in the lyric-dramatic repertoire with highly acclaimed interpretations such as Chrysothemis (Salzburg 1995) and Elsa (Paris 1996), and she is now one of the absolutely leading sopranos of her generation with performances in all major opera houses, in particular the Metropolitan Opera.
Karita Mattila is reknowned for the beauty and versatility of her lyric-dramatic voice, with an exceptionally beautiful middle register as well as for her extraordinary stage ability and range of expressivity. Karita Mattila is also an admired recitalist and exponent of new music, particularly that of compatriot Kaija Saariaho, who also wrote a song cycle for her, Quatre Instants in 2002 as well as an opera Emilie du Chatelet in 2010.
Karita Mattila on the profession:

"It doesn't do any harm if you look good and take care of yourself. I lost 40 pounds through Weight Watchers when I was 22 and I am glad I did it. I wasn't fat, but I was plump, and I didn't feel comfortable. It has been an eternal battle. It has nothing to do with vanity; it's just to serve your work by looking the part.""I don't break my contracts for personal reasons because I owe it to my audience to be there. If it has already been announced that I will be singing there, then I think it would be very unprofessional for me to cancel."

"There is always room at the top, and it is very windy, meaning that it is harder to be at the top than on the way up."

Elsa (Lohengrin) - Paris Bastille Opera 1996 (d: Carsen), Metropolitan Opera 1998, 2006 (d: Robert Wilson). Her immensely beautiful middle register and secure top made Karita Mattila the ideal Elsa, a role she now seems to have retired from her repertoire. She was unsurpassed in this role, possibly her finest to date.

Chrysothemis (Elektra) - according to Mattila, this role in Salzburg 1995 marked her transition from Mozart to the heavier lyric-dramatic repertoire, for which she is reknowned today. She seems to have retired this part as well.

Katya Kabanova, Jenufa, Emilia Marty - Karita Mattila has a special affinity for Janacek´s heroines, which she continues to perform at major stages worldwide, as in the DVD released Katya Kabanova in Madrid 2008

Salome - Paris Bastille Opera 2003 and Metropolitan Opera 2004 and 2008 (also on DVD). Karita Mattila´s Salome is among the most admired operatic performances of the last decade. Sound clips from the 2004 Met performance and video clips from her Paris Salome here.
Review of Karita Mattila´s 2008 Met Salome, which was also transmitted live in HD and released on DVD.

Puccini heroines - Tosca (Met Opening Season 2009 released on DVD and Bavarian State Opera 2010), which she sang to mixed reviews and now seems to have retired. Manon Lescaut (among others Metropolitan Opera 2008, also released on DVD).

Karita Mattila has been working closely for over a decade with finnish composer Kaija Saariaho, creating Emilie in Emilie du Chatelet in 2010.

Is this suddenly a Karita Mattila fan site?

I thought someone would ask, finding this post slightly out of place as well myself he-he..

The reason: I am trying to optimize the organization of the entire site, by making some basic posts on topics I write about often, such as the Bayreuth Festival and René Pape - no need to ask if this is a René Pape fan site is there? :)

So - in order to practice this new type of post, I wrote a post on Karita Mattila, to see how my other postings would fit in with it...

I think it's a nice idea that will add a lot of reference data about certain artists and create some new avenues to explore. The other thing I might add (not that you need any advice to improve what is already an excellent site :) would be more, how shall we say, philosophical insights into characters, scenes, musical structures, etc. You know, things that will inspire good conversation about the deeper symbolic nature of opera. You started to head in that direction recently by listing some of your favorite operas and the darker elements that you find intriguing. Discussion threads like this might be a nice complement to the uniformly excellent coverage you give to schedules, reviews, artist news, etc.

All suggestions to improve this site are most certainly welcome, thanks :)


I certainly hope you're wrong about Mattila droping Elsa. I don't think she ever sung it with great fequency and I hope that she comes back to it sometime close to when Fleming sings it. Nothing like a big time Diva throwdown. (We do have the Onegin with Mattila for Fleming next year. Throwdowns in other roles would be welcome as well, although for some reason I don't see Mattilla as the Marschallin or Fleming as Salome [this idea, of course, is not offensive for...umm...obvious reasons]).

On that topic and purely on the basis of vocal quality Mattila would have to have the significant edge over Meier in Fidelio although the latter was in every way superb and in excellent voice. It is also notable that the last time I heard each in the role both were 46.

Incedentally, the scheduling and ticketing gods having conspired in my favour (as they seem to be doing this summer), I'm going to see Meier in Tristan in Munich this Friday and am certainly excited about the prospect.

Actually, Mattila herself has stated in an interview that she has moved on from both Eva and Elsa.
Rumours have it she will do Emilia Marty (Makropoulos Case) and Lisa (Pique Dame) in upcoming MET seasons. And my guess would be a Sieglinde as well.

And yes - she really does have a significant edge over Waltraud Meier in Fidelio, I have seen both live in the part as well.

I saw Waltraud Meier in that Konwitschny Munich Tristan production last November and both she and the production (and René Pape who unfortunately is not around now) were absolutely astonishing.
She got excellent reviews on her Munich Isolde 2 days ago (which cannot be said of the Tristan, whom I´ll for once do the favor of not mentioning..)

Meier was superb. For some reason I really liked Nagano's take on the score as well as the production.

$#@%@& about Mattila dropping Elsa. At least I've heard her as Elsa which is more than I can say about her in Mozart.

Yeah, Pape was missing but he does need rest and for some reason I don't put as much of a premium on his Mark as perhaps I should, which is less than I can say for his Filippo, about which more elsewhere...

As long as you don´t tell me you prefer Jan-Hendrik Rootering...

This Munich production is actually the best production (of the 7-8) I´ve seen RP as King Marke in, since he for once is not made to look semi-stupid, as he is at both the MET and Glyndebourne T&Is, to mention a few.