DVD: Placido Domingo presents Parsifal - the search for the grail 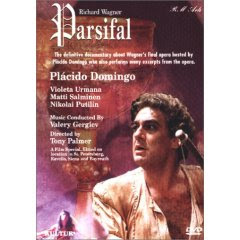 Parsifal - the search for the grail. A film special with Plácido Domingo. 1998. Further information here.

First of all, this is not a filmed production of Wagner´s last opera Parsifal, but rather a 90-minute documentary centered around the sources of Parsifal - primarily the Grail legend and its treatment in modern culture, mixed with selected scenes from he opera.

The documentary is filmed on location in Bayreuth, St. Petersburg and Ravello (Southern Italy), and includes a brief interview with Wolfgang Wagner (grandson of Richard) on the Bayreuth Festival stage in an (almost) understandable German. Modern works inspired by the Grail legend are also presented, such as Monty Python and Indiana Jones.

Then, however, so-called experts comment on various aspects on the Grail legend and Wagner´s treatment of the sources, mainly resulting in simplistic and naive comments revealing a minimum of insight into the complexity of Wagner´s score: Conclusions on how Parsifal carries a message of universal peace and the racial messages of Parsifal and their influence on Hitler and Holocaust also seem simplistic and I am not at all convinced they are substantiated by facts.

The highlight of the documentary is the passages from a live Parsifal performance in St Petersburg featuring Plácido Domingo, Violeta Urmana, Matti Salminen, Nikolai Putilin and Valery Gergiev. Unfortunately, these clips are far too short.

The film is narrated by Plácido Domingo, whom I generally consider an intelligent man. Though also he makes some very simplistic comments on the universal messages of Parsifal, which I will do everyone a favor of not repeating here..

Though this documentary may serve as a fine introduction to the opera Parsifal, it definitely does not hold for repeated viewing.

Furthermore, the dvd contains a few images of Anna Netrebko as Blumenmädchen singing and dancing around Plácido as Parsifal. I thought it was from Salzburger Festspiele.

Didn´t even notice that..Has to be from Marinsky Theater, I´d say.

You are right, this comes from St. Petersburg. I think it is May 1997.