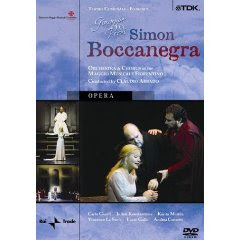 Peter Stein´s production of Simon Boccanegra was recorded at the Maggio Musicale Fiorentino in 2002 and is a coproducton with the Salzburg Easter Festival.

In brief: This is a production memorable for the presence of Karita Mattila and Claudio Abbado.

In other words: Peter Stein´s staging is rather unspectacular. Simple, dark and aesthetic, yes. But interpretatively I have no idea what his messages are. We look at projections of pillars, houses and mosaics in the background of the mainly blue sets, in which the only contrast seem to be the predominantly red period outfits worn by the singers. Any individual stage direction or concept does simply not get through here.

Except for Karita Mattila, the singers are very anonymous and not to be remembered (or mentioned any further, at least not by me), and only with the entrance of Amelia does the stage seem to lighten up.
A pity really for Claudio Abbado, whose superbly conducted Simon Boccanegra need fear comparison from no-one in history as already documented on his bench-mark audio recording.
Unfortuntately, Karita Mattila and Claudio Abbado cannot entirely save this production.