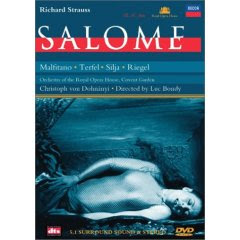 Luc Bondy´s production of Salome has traveled around the world, and to be completely honest, I fail to fully understand why.

Admittedly he is not helped by his Salome either. A signature role for Catherine Malfitano, I nevertheless find her Salome inadequate - vocally as well as dramatically. And vastly below the standard of her own previous DVD Salome from Berlin as well. Malfitano attacks the notes fearlessly and hits most of them as well, but the gleam, presence and character essential for a great Salome simply is not there. And a great actress she is not, in my opinion, though in fairness I should add that opinions on her Salome vary widely. Furthermore, a thrilling Salome depends on the chemistry between Salome and Jochanaan, which is simply not there.

Admittedly there is no better Jochanaan on DVD than Bryn Terfel. Nevertheless I do not think he is the truly great Jochanaan many have made him out to be. For the same reasons I do not think he is a great Wotan or a great Dutchman. Lack of majestic presence and commanding noble voice are some keywords. Not that Bryn Terfel´s voice is not both commanding, powerful and beautiful. It surely is. But his true strenght as a performer, in my opinion, lies in the edgier characterizations of less noble or haughty chatacters. As such he is a much better Leporello than Don Giovanni. And he would be among the truly greats as Alberich as well. His Johanaan has the presence of a nice fatherly priest as opposed to the commanding mysterious mytic. Nevertheless, his qualities place him vastly above virtually all his present, if not past, competitors in this, as in most of his other parts.

Kenneth Riegel and Anja Silja are both great as Herodes and Herodias. While Dohnanyi is by no means substandard, I miss sparkle and energy in a rather too anonymous performance.

Catherine Malfitano and Bryn Terfel in the confrontation between Salome and Jochanaan:

I totally disagree regarding Terfel. He is absolutely spellbinding. No mystical or mythical presence? He exudes-both -and also the disturbingly feverish fanaticism characteristic of a zealot.He has a commanding voice and stage presence which make him a truly hypnotic Jochanaan if there ever was one,-a true great. A man so mystical, mysterious and powerful,someone who is not afraid of dying and is a man worth dying for. The reluctant object of a fatal attraction... a man of God...yet he is also very much aware of his own attractiveness, but he is also a man, not "just" a prophet the whole point of Salome is lost if Jochanaan is not worth dying for... Terfel's brilliant and amazing Jochanaan is definitely worth dying for.... and the whole cast is just so very brilliant. The definite version of Salome on DVD IMHO.

I thought Malfitano was a better Salome than the reviewer did, although she clearly had to pull out all the stops for an effective performance. Terfel was a very good Jochanaan but I had some problems with some of the over-the-top dramatics he was asked to do.
Riegel was good but Silja (great in
her prime) has no voice left. I'll stick to the Stratas/Bohm
film.