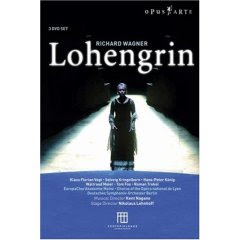 Nikolaus Lehnhoff seems not to have forgotten his old boss and mentor Wieland Wagner as there is a certain New Bayreuth timelessness as well as an air of ancient Greek tragedy to this Lohengrin recorded live in Baden-Baden in 2006, also seen at La Scala last season.

Lehnhoff sees Lohengrin as a psychological drama centered around Elsa, who is virtually present on stage during the entire opera. This is a drama of contrasts: Good vs. evil, white vs. black, hate vs. love, white spots on the good guys, dark on the bad guys etc. It takes place in a non-specified modern time period. The main stage elements are a concrete circular Greek amphitheatre (Act 1 and 3) and a flight of Freudian steps going nowhere (Act 2).

Lohengrin stands out from the rest: He wears a silver suit. He appears through a vertical door of light. He plays on an inverted piano in Act 3, which disturbed Kent Nagano so much during the rehearsals that he asked Lehnhoff to exchange it with an ordinary piano (which he refused). This Lohengrin is clearly more interesting in his art (and ultimately in himself?) than in pursuing a relationhip with Elsa, a directory approach excellently suited to Klaus Florian Vogt´s strenghts as a performer. Everything ends in chaos when Elsa lies dead on the floor at the end of the opera.

There are virtually no weak elements in a cast chosen as much for dramatic as vocal abilities.

Solveig Kringelborn interprets Elsa (unless she simply plays herself) as a slightly naive/irritating woman. Vocally her upper-register vibrato may not be to my taste, but otherwise she is actually rather good.

Ortrud is one of my favourite characters in any opera, and I still regret never having seen the Harry Kupfer Lohengrin production at the Berlin State Opera in which Ortrud and Telramund allegedly were the good guys and Elsa indeed did kill her brother. As a new Lohengrin will be staged next season in Berlin, it seems a production of the past.

Waltraud Meier´s mesmerizing Ortrud, finally available on DVD, is vastly better than any of the competition on (or off) DVD and whatever one may think of Lehnhoff´s staging, this DVD is well worth owning for her Ortrud alone. Furthermore, Waltraud Meier is in superb vocal shape. In fact, I have never heard her less sharp in her high register than here, cutting through the orchestra like a razor-blade. And she has never looked better on stage than here in Act 2. Indeed, the Ortrud-Telramund scene from this production may be one of the very best opera scenes to ever be released on DVD (video clip below).

Telramund, basically a whimp, is a thankless part, but Tom Fox manages to infuse some dignity into him, vocally as well. Hans Peter König furthermore is excellent as the good-natured King Heinrich.

Finally, Klaus Florian Vogt is a curiously fascinating as well as vocally superb Lohengrin - his voice is powerful and clear with an effortless top virtually unheard of today. Furthermore he sings with plenty of nuance and dignity. He looks fine on stage as well. But a romantic hero he is simply not, with a strangely inexpressive face and an air more remniscent of a psychopathic serial killer than a swan knight. Either Klaus Florian Vogt, Lohengrin or both are in love with themselves (to be fair: Klaus Florian Vogt seemed a very pleasant guy in the bonus documentary)...

Kent Nagano is inspired throughout, keeping a relatively brisk tempo with plenty of energy.

A 60-minute bonus documentary is included, of which one may conclude that while watching Lehnhoff´s staging is both illuminating and entertaining, watching him talk about it is equally irritating. Furthermore a not negligible part of the documentary is spent inside Klaus Florian Vogt´s van, parked directly outside the Baden-Baden Festival House, and serving as his home away from home...

Which is the Lohengrin DVD to own? This one, in my opinion. For a traditional production, Claudio Abbado´s Vienna production (with Plácido Domingo and Cheryl Studer) is wonderfully conducted and sung (Ortrud apart), but gives the impression of being trapped in the dark medieval ages with no escape.

For an entirely deconstructive take on Lohengrin, Peter Konwitschny´s Barcelona production may be worth a look.

For various reasons, mainly related to casting issues, I cannot honestly recommend either the early Bayreuth or the Metropolitan Lohengrin DVD productions.

Waltraud Meier and Tom Fox, Act 2. This scene alone is worth twice the price of the entire DVD:

General impression: 4 (downgraded after some thought - see the comments)

This production was also seen in Lyon in October 2006 (with not such a cast and conductor obviously).

I´m a big fan of you and your wonderful Blog. So first of all...Many Thanks for your Great Work!
Even if my opinions are sometimes farway from yours.... About this Lohengrin I disagree totally with you: Kringelborn 2(fixed voice, bad acting, in theater was also worse than year..)Fox 2(without intonation and horrible high notes, humiliated in the second act by the Greatest Meier) Nagano 2 (all boring and nothing wagnerian) Lehnhoff (all without soul and feelings, always the same "Theater in the Theater", ridicoulos suit for Lohengrin).

Thanks again and Bye bye

Anonymous: Looks like we agree on the only thing that really matters in this production: Waltraud Meier. Of course, Tom Fox was overshadowed by Meier, but I have seen far worse. Didn´t think his intonation was so bad though..Let me ask: Who would make a fine Telramund next to Waltraud Meier? I have no idea...

You see, the only parts of this Lohengrin I ever see are Waltraud Meier´s scenes. I wouldn´t buy this for the Lohengrin-Elsa interaction which Lehnhoff does not do very well. If I were Elsa I would seriously be afraid that this Lohengrin may kill me.

I was actually surprised I liked Nagano, as I normally find him rather tedious and non-Wagnerian as you do.

I've bought this DVD after reading your post, and have to say haven't regretted a cent spent on it. You were absolutely right about Meier. I really don't care about anyone else in this production (thought they are not bad), and I've been playing the second Act over and over again. This is by far the best Ortrud I've ever heard and seen(i basically have all the other DVD releases). Absolutely stunning. Can't wait to hear her singing Ortrud in Vienna next season.