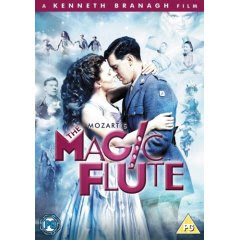 Set in the trenches of World War 1, the main theme of Kenneth Branagh´s 2006 Magic Flute film is no less than World Peace. The conflict between Sarastro and the Queen of the Night, here a "complicated, but not evil woman" is central to the story. The war provides a backdrop of creating a meaningful relationship beween the two and all references to masonry etc. are eliminated in favor of this pro-peace approach.

This apart, Schikander´s plot is followed quite closely. Sarastro is a wealthy man whose castle is a hospital for the wounded. The Three Ladies are nurses and the Queen of the Night makes her entrance on a tank..

Kenneth Branagh´s Magic Flute is a curious hybrid of realism and fantasy, drama and comedy. Initially the cameras sweep the battle fields, however soon comic strip elements such as floating red hearts and lips are introduced. Interpretatively, Branagh seems to stand between two chairs, undecided as to whether his Magic Flute is epic and poignant or light and witty. Though, in theory not an uninteresting approach, the world-peace vision seems rather overinflated and sentimental, to a degree that I must admit to bailing out.

As a soundtrack alone this simply does not work either as the casting is notoriously uneven.
Rene Pape's Sarastro is arguably the greatest alive and his singing sets him vastly above his colleagues, who for the majority sound like light-voiced conservatory students (Joseph Kaiser´s Tamino excepted), though they do look their parts especially Lyubov Petrova as the Queen of the Night.

Non-German speakers may not care about this and normally I wouldn´t either, but Stephen Fry has adapted the libretto mainly by rewriting and shortening the spoken dialogue, which works moderately well and then by translating everything into English, which approximates a disaster. His lack of experience in dealing with singers does show when he butchers several of the arias rendering them virtually un-singable.

For English-speakers the lack of subtitles on this DVD in theory should pose no problems. To be brief: It does.

As I´d predict responses to this film to vary widely, potential buyers are well adviced to take a look for themselves. The below two clips may be considered representable of the film.

An example as to why I bail out: The tacky world-peace concept at it´s worst combined with the butchering of "O Isis und Osiris" by Stephen Fry. René Pape is Sarastro:

A selection of clips from various parts of the film: