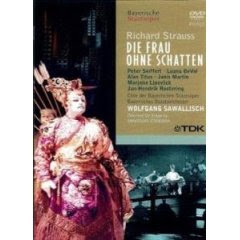 This FroSch was Sawallisch´ last new production as principal conductor of the Bavarian State Opera after 21 years. Recorded on tour in Japan, these were also the first performances of FroSch in Japan and recorded by Japanese television, though not allowed to broadcast it in Japan due to concerns on various aspects of Hofmannsthal´s libretto, such as the appropriateness of Barak having hunchbacks as brothers.

The production is a curious hybrid of traditional Japanese Kabuki and Western staging, which seems strangely fitting for this opera. The stage is dark, the costumes are Japanese. It is elegant, beautiful and strange. And much better understood by a video clip from the production than by any description I may come up with:
The ending looks the quintessence of Japanese symbolism (of which I indeed know very little): The Emperor and Empress standin above and Barak and his wife below a small bridge.

The only other FroSch on DVD is Solti´s Salzburg Götz Friedrich production filmed around the same time.

Of the singers, Luana DeVol does not approach Cheryl Studer for Solti (the best Kaiserin I have heard apart from Léonie Rysanek). Marjana Lipovsek is a superb, demonic Amme in both productions. The rest of Sawallisch´ cast were neither spectacular nor bad.

Despite this being Sawallisch favourite opera, he simply does not match the poignancy of Solti with the Vienna Philharmonics. As a matter of fact, nobody does.

I’ve seen the 2 DVD’s you are refering to and I don’t entirely share your point of view (The impression you must have of me is biased by the fact I don’t say anything when I am OK with your interesting reviews).

Sure Solti is much more passionate than Sawallisch. Sure the Salzburg production is much more lively than the Nagoya one with its gloomy settings. Sure Studer is a marvellous Kaiserin and it is a pity than Varady didn’t make the trip to Japan. But there are good reasons to discover FROSCH with the Sawallisch DVD. First , the music is not Strauss’ easiest and newcomers can benefit of the exceptional clarity and lisibility of Sawallisch’s conducting. Solti reinforces the contrapuntic aspect of the music and if the virtuosity of the orchestra is stunning, it is sometimes difficult to follow the (a) general line. Second , Lipovsek (die Amme) is in a much more healthful vocal state with Sawallisch than with Solti. With Sawallisch, she sings. With Solti, we begin to hear this raunchy and throaty voice which has been her trademark in her last recordings (The Zurich Klytemnestra !). Third I find your treatment of Seiffert marvellous performance (we know he is irregular but there he gives the best of himself) a little bit unjust and if Moser is an elegant Kaiser, it is often impossible to hear him at all. It is particularly obvious in the third act where he is vocally exhausted and you can say the same about Hale’s Barak. Titus at this time was a bit raw but you can at least hear his voice…

I hesitate to give my point of view about the dyer’s wife because – It is very personal- I have never liked Marton’s voice. And in my opinion, at this time, Martin is very convincing, vocally and scenically. I like to listen to singing voices and not to “harengeres” (In France harengeres were selling herrings in markets and it gives an idea of their vocal style). And in this perspective, Martin is OK with me.

It is why when I want to enjoy Solti’s interesting musical conception, I listen to the CD with Behrens, Varady, Terfel and Domingo. But concerning DVDs, I got used to look at kabuki, and, globally, I prefer the voices in the Nagoya production.

Excellent. Thanks for your always interesting contributions...

I am very much biased towards Solti in this work, finding his performance so monumental, that it outshines that of everyone else, on his own or on cometing sets. Overall, I´d probably agree that the singers are better for Sawallisch (I haven´t much cared for Eva Marton either).

To be honest, I don´t really watch any of the DVDs, but rather listen to Solti´s recording.

I am surprised with the relatively poor ratings of Devol and Seiffert. Devol does not have the Studer timbre, but she sails effortlessly on one of Strauss' most challenging role and she can act (unlike Studer who sings wonderfully but justs stands there).
And Seiffert is in fantastic and fresh voice and seems unchallenged by this very hard tenor role.
And Maritn is also better than Marton (whom I like but who isn't the ideal dyer's wife)