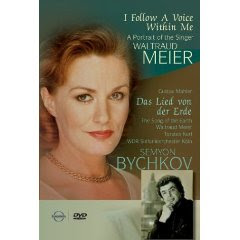 This is a portrait DVD of acclaimed German mezzo-soprano Waltraud Meier including a live performance of Das lied von der Erde.

Considering, this is supposedly an introductory portrait DVD, the selection of clips are rather curious, though. Virtually all video footage on this DVD is otherwise not commercially available, and as such is interesting for those already familiar with Waltraud Meier. As an introduction to the artist Waltraud Meier, I´d have thought extended clips from staged performances more appropriate. However, the choice of material was no doubt limited by contractual issues.

Rather surprisingly, we don´t see Waltraud Meier in her signature role as Kundry. Admittedly she appears twice (Metropolitan and Baden-Baden) on commercially available DVDs, however a clip from an otherwise not available performance, or even a clip from one of these DVDs would have been most welcome. However, I suppose contractual issues are at play here, as well.

Her Sieglinde we see in piano and orchestra rehearsals of the (not commercially recorded) Jürgen Flimm Ring, with Plácido Domingo in Bayreuth. For some entirely unimaginable reason, her Sieglinde (or Domingo´s Siegmund) is not commercially available on DVD, despite them turning out the most convincing Wälsunge twins of countless years.

Waltraud Meier´s dashingly brilliant Ortrud we again see only briefly from a rehearsal of the old Vienna Lohengrin production. For the complete Ortrud, one has to seek out the DVD of the Lehnhoff production from Baden-Baden.

Outside of Wagner, Waltraud Meier is (or at least: 5 years ago she was) a great Fidelio-Leonore, here seen rehearsing the rather boring Mussbach production in Munich (with Matti Salminen).

Of her non-Wagnerian parts we get a brief glimpse of Amneris (with René Pape) from Berlin and the Ariadne-Composer (Vienna). The only clip from a commercially released performance is that of her Marie in the Chéreau Wozzeck production from Berlin. Among her other non-Wagnerian repertoire, Waltraud Meier is, by the way, also a great Santuzza. Obviously selections have to be made but I would have been particularly interested in seeing her as Carmen.

All clips are interrupted by short interviews with Waltraud Meier as well as colleagues.

The second half of the DVD includes a fine, but unexceptional complete live performance of Das lied von der erde with tenor Torsten Kerl and Semyon Bychkov.

Since this doesn't exist (as far as I know) on DVD, I found these links for download. I think it's worth seeing: Waltraud as Sieglinde and Domingo as Siegmund in ''Walkure'', La Scala, 1994, Muti:

In addition to the links described above you might like to investigate the London 2005 Die Walkure concert performance – with Meier, Domingo, Gasteen, Terfel amongst others. The atmosphere is electric.
This is quite simply one of the most glorious performances I have ever seen on video.
Available from www.houseofopera.com.