Metropolitan Opera Tristan and Isolde on DVD: The eternal night.... 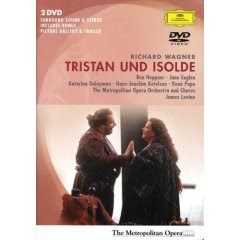 If Tristan and Isolde had been a staged oratorio for bass and (mezzo)-soprano, this would have been a fine performance indeed.

The smooth, polished sound of James Levine´s Metropolitan Opera Orchestra makes for meditative listening - at some point even approximating the effect of a sleeping pill.
Beautiful, it most certainly is. Engaged and passionate, it most certainly is not. And with this score, it really does make all the difference. Just listen to Daniel Barenboim to appreciate exactly what James Levine lacks here. Or listen to James Levine himself conducting Puccini or Verdi...

Katarina Dalayman and René Pape both look entirely out of place in this setting. René Pape had his major international breakthrough in this production with his beautifully sung and convincingly acted King Marke. As Brangäne, Katarina Dalayman is more peripheral to the drama, but nevertheless superb. René Pape sings for approximately 15 minutes, Katarina Dalayman for slightly more. Now only three hours are left...

Jane Eaglen and Ben Heppner both look and (inter)act like two whales on stage. René Pape´s King Marke must be insane to seemingly want this woman. It simply does not make sense. And it does not only have to do with her size, though obviously it doesn´t help her credibility either.

Some may argue that Jane Eaglen and Ben Heppner are vocally solid, if not splendid, and I suppose they are, to a certain extent. However, this post relates to a DVD production, and it simply does not make sense to have to "watch" it with closed eyes. That said, I have listened to the radio broadcast with the same cast, and while I find neither protagonist to deliver shattering interpretations, they do come across vastly better when the visual element is taken out. But again - I am commenting on a DVD production.

Those not familiar with this 1999 Dieter Dorn production either from the house or this DVD, may have seen it on the HD telecast earlier this season. I rather like this much maligned minimalistic and quite aesthetic production relying heavily on light effects, however this DVD clearly illustrates the increased dramatic and interpretative demands placed on the singers by the almost naked stage. Which are truly only met by King Marke. And Brangäne. Unfortunately not enough to make a production of Tristan and Isolde work.

No matter what standards one may expect of the Metropolitan Opera, this DVD falls far short of them. In my humble opinion, obviously. And no disrespect intended towards the involved artists.

But why oh why did the Metropolitan Opera ever release this thing?

10 of the 15 minutes worth watching on this DVD (King Marke´s lament, first part):

Agree with your assessment. This was my first exposure to Pape and it was love at first sight. Dalayman hits a note when she's explaining the situation at the end to, I believe, Marke, that is the most beautiful in the whole opera. I am hoping against hope to see this next year when I believe she's singing Isolde and he's singing his Marke.

I couldn't agree more! Ohhh and thanks for the all-you-need-to-know-about-Bayreuth post. I was re-reading your last year Bayreuth report the other day and found it a)so amusing and b)so useful. R u going back to the Green Hill this year???

Not sure about going to Bayreuth, but I´d like to see the new Parsifal. I am definitely going to Salzburg, and in that respect, Bayreuth is sort of around the corner, I suppose..

It will be very interesting to hear the orchestra under Barenboim this season. Dalayman as Isolde should be interesting as well base on past experience and the great reviews she seems to be getting at Aix.

Thanks for the review! I am struggling through this dvd right now, and it is really helpful to see that it is not just me. Both Eaglen and Heppner are dreadfully dull.

Thanks for the review! I am struggling through this dvd right now, and its good to know its not just me. Eaglen and Heppner really are dull.