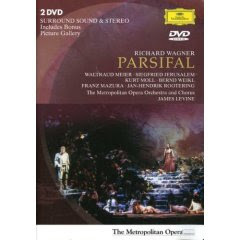 If someone had told me this 1992 MET Parsifal was based on the staging of the 1903 outlawed first house performance of Parsifal, as Richard Wagner had banned Parsifal performances outside Bayreuth for 30 years, I would have believed them. So dreary is Otto Schenk´s predictable realism and wishes to realistically transform Wagner´s images, that this production indeed looks 90 years old. Or at least 50..

It is in fact dated 1991, the premiere featuring Plácido Domingo´s role debut as Parsifal and as one of James Levine´s favourite operas this Parsifal has been in the repertoire ever since, featuring a parade of the foremost Wagner singers of the day. This DVD was recorded in 1992, with a cast unmatched at the time.

Now, what is it with the combination of James Levine and Richard Wagner, that doesn´t add up? Which is of course a somewhat unfair comment, since it does add up, just not to the same extent as Levine combined with other composers, such as Verdi, Puccini, Gounod etc. where he is dynamic, engaged, lively, in short: Mostly brilliant. The gleamingly dense Faust he conducted a few seasons back in New York immediately comes to mind.

In Wagner he is the exact opposite: Placid, beautiful, smooth. Is it that he just doesn´t come to terms with the inner structure of Wagner´s works the way he apparently does with Verdi and Puccini?

James Levine´s Parsifal is a slowly moving carpet of smooth, elegant, but also automatic beauty. There is too little glitter, too little drama, too few nuances, no surprises. Perhaps these are artistic choices of mr. Levine´s. If that is the case, I simply do not agree with them. Still, James Levine is by no means a second-rate Parsifal conductor, Parsifal being his finest Wagnerian performance as well, and admittedly there are moments in the score working quite well.

Kurt Moll has a solid and deep, but ultimately not a very flexible voice. He delivers the monologues of Gurnemanz, but fails to tell the exciting story behind them. Siegfried Jerusalem is physically believable as Parsifal, but vocally he seems rather tired, not in good voice and is much better in the Bayreuth Parsifal DVD approximately 10 years earlier.

The young Waltraud Meier is quite possibly the best Kundry in history with the exceptional combination of an unmatched stage charisma and the ability to meet the vocal challenges of the part, with an easily projected top notes as well as superb vocal characterization.
Furthermore, Bernd Weikl is in fine voice as Amfortas and Franz Mazura looks every bit like Klingsor, though vocally he is slightly shaky.

Parsifal is still not well-served on DVD. None of the available versions are whole-heartedly to be recommended, but for another traditional approach, some may appreciate Wolfgang Wagner´s Bayreuth production from 1981, though it looks like a semi-decent copy of one of his brothers productions 40 years earlier and Horst Stein by no means surpasses James Levine on the podium (rather the contrary, as a matter of fact).

Also Lehnhoff´s 2004 Baden-Baden production (with Waltraud Meier, Matti Salminen and Kent Nagano) has some fine moments as well as an interesting stage concept.

As Parsifal is really the conductor´s show, I am still waiting for a Daniel Barenboim-conducted performance to be released on DVD, which is bound to happen eventually.

Regarding the 1903 MET Parsifal production, a revival of one of the acts in a copy of the original staging will indeed be shown at the MET 2009, as part of a gala celebrating the 125th Anniversary of the Metropolitan opera as well as Plácido Domingo´s 40 years with the company.