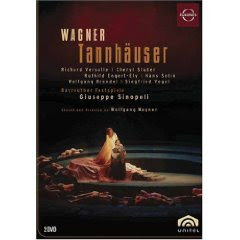 This production is quite simply a disgrace. Admittedly, Former Bayreuth Festival Intendant Wolfgang Wagner is not the most ingenuous of directors, mainly expanding on the ideas of the New Bayreuth of the 50´s conceived with (or by) his brother Wieland. And if this production belonged to this time period it would have been acceptable, at least to a certain extent. However, the year is 1989. 15 years previously at the same house, Götz Friedrich staged a ground-breaking Tannhäuser, but here we are back at year zero: Uninspired sets, no individual direction to speak of. In short, dusty and boring. I have been told that Wolfgang Wagner is not a hands-on stage director, that he works on an entirely different (read: higher) level. That may be so, but what matters is the final product, which in this case is an outdated staging not worthy of the Bayreuth Festival.
The cast is solid enough, lead by the magnificent Cheryl Studer, with simply perfect jugendlich-dramatisch expression as Elisabeth. Ruthild Engert-Fly is certainly no Waltraud Meier, but on the other hand Wolfgang Brendel gives a convincing performance as Wolfram. As Tannhäuser himself, a monstrously difficult role to sing, Richard Versalle was easily forgettable. Giuseppe Sinopoli was quite refreshing in the pit. But in the end, it amounts to nothing, being forced to look at these sets. You may always close your eyes. But after all, this release is labelled as a DVD.