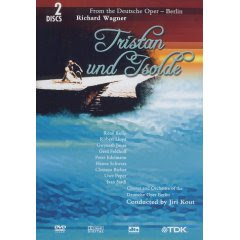 Götz Friedrich´s 1980 Tristan and Isolde (which may still be seen at the Deutsche Oper) is simple, traditional and very aesthetic, with the directorial focus on the relationship between the protagonists. A wooden ship, a garden, a stony bridge among rocks. Contrasting lights are used to great effect, best is the discovery scene where King Marke and his men approach the suddently illuminated couple on a wooden bride above the ”garden”.

There is an effusive air of romantic middle age to this production, quite similar to that of Ponnelle´s 1982 Tristan from the Bayreuth Festival. Unfortunately, this is where the similarities between theses two productions end:

The protagonists are simply way past their prime and the major draw-back of the production is Gwyneth Jones´ wobbly Isolde, captured at a point where her wobble has become intolerable. Gwyneth Jones has had a long and distinguished careeer, and in the 60´s and 70´s she was very exciting – but she simply continued singing this repertoire way too long: This Isolde is one example, her Ortrud in Paris 1996 was even worse.

At the time of this recording, Gwyneth Jones was 56 and René Kollo 55. Kollo is slightly less offensive than Jones, but still a shadow of his 1982 performance in the Bayreuth Barenboim/Ponnelle production. As for the others: Hanna Schwarz remains a fine Brangäne, though vastly better in the previously mentioned Ponnelle production as well. Robert Lloyd is a dramatically convincing King Marke, his peculiar nasal singing apart.

Jiri Kout is a competent conductor, but predictably fades compared to Daniel Barenboim.
For those wanting a Tristan with a "traditional" staging, the recently released DVD Tristan from the Bayreuth Festival 1982 in Ponnelles production conducted by Daniel Barenboim is recommended as it is superior at every single point.

Gwyneth Jones and René Kollo in the love duet:

Obviously, you're no connoisseur of the vocal arts. Ridiculous comments and trashy views.