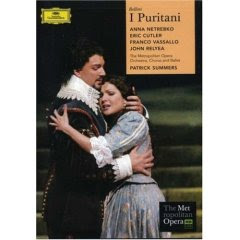 Imagine being one of those potential Metropolitan Opera audience members intrigued by opera via the HD telecasts and outreach marketing strategies initiated by new MET manager Peter Gelb. Curious to know more about opera one then decides to buy an opera DVD and choses this Puritani since the only singer one has heard of is Anna Netrebko, thus imagining this to be a good introduction to opera as the contemporary art form, one repeatedly is being told that it is....

Even those unfamiliar with this Puritani production may have guessed the point I am slowly trying to make here: This is a production truly worthy of an opera museum. Opera as a contemporary art form? Not here. Even Anna Netrebko has publicly stated this to be a very dull production.

Anna Netrebko´s engaging Elvira is the only real reason to watch this as she shines in a truly engaging performance. She literally kicks the dusty sets alive. At this point bel canto afficionados tend to compare her with Beverly Sills and Joan Sutherland as well as critizing her lack of true bel canto style. Just a quick glance at the more than 100 comments accompanying the video of Anna Netrebkos Mad Scene ensures that this is not a subject to be taken lightly. I´ll refrain from commenting, as my knowledge on the subject is even less than my interest in it...

The remainder of the cast tends to stand still and deliver their lines, no doubt as intended by the director:
John Relyea´s appearance however, deceives. He looks good and is a fine actor. These two points seem to overshadow the fact that his voice indeed is rather unappealing. Of the others, Eric Cutler is as fine as any in the thankless role of Arturo.

May this be recommended? For fans of Anna Netrebko, yes.