Pélleas and Mélisande on DVD: Pierre Boulez and Peter Stein from the Welsh National Opera 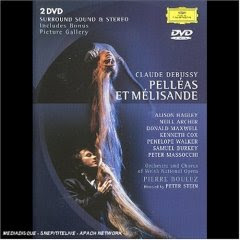 In brief, this DVD presents the finest combination of singing, acting, staging and conducting of the available DVD versions of Pélleas and Mélisande.

Peter Stein has created a very aesthetic and semirealistic production, mostly with the use of the colour dark...

It begins in the dark among the tree roots. There is a stony well. Tree trunks loom in the background. Then we move inside a victorian house. Probably in the 19th century. Perhaps this is a religious community? It is still dark. Arkel is clad in white wearing a golden crown. Outside, the mansion appears in the horizon as an ominous black silhouette. The environment is oppressive. Pélleas and Golaud appear beneath a sickening yellow sun. In the end, the roof opens and the dying Mélisande escapes this constricted environment, where she clearly does not belong.

Peter Stein´s very effective and detailed direction focuses on the psychology and interpersonal drama, as opposed to the lofty and abstract ideas often associated with Pélleas. The interaction between the earth-bound Golaud with all his shortcomings and the inapproachable Mélisande is very convincing and Mélisandes relationship to the old Arkel is quite touching. The idea of a boy soprano as Yniold is a good one.

The semi-abstract staging creates a fine background for Pierre Boulez´ transparent reading, which may well be a main reason for achieving this set. Debussy is one of the composers gaining the most from Pierre Boulez´ objective style, as opposed to the sentimenal impressionistic Monet-waterlily-approaches, and Boulez adds poignancy and dignity to the music as well as bringing out the suppressed violence in the score. And the influences from both Tristan, but in particular Parsifal are so obvious, particularly in the scenes involving Arkel. During the interludes, sections of Debussy´s score are shown on screen.

For those curious of advanced regie theater, Sven-Eric Bechtolf´s interesting experiment with body-doubles from Zurich may also be worth checking out.