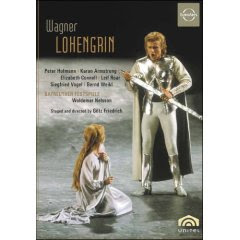 That Elsa is a sensitive, but not overly naive woman dreaming of an alternative to her power-obsessed compatriots is obvious from the moment she appears in misty light during the prelude. She conjures up the imaginary Lohengrin, appropriately dressed in white. However, when he returns in Act 3 as a black knight returning a miniature warrior brother to Elsa, we realize that there really is no hope.

The staging is simple, square, dark and unfortunately very static as well. While it may offend no-one, I doubt many will find it exciting. What however works well, austere surroundings apart, is the core romantic drama, mainly thanks to Peter Hofmann.

Peter Hofmann is the ideal romantic Lohengrin. He looks the part. He is the real romantic hero. He sings well. He is very moving. What more can anyone want? That Peter Hofmann in the last part of his career (end-80s) may have performed less well, may quite possibly be attributed to the well-known incipient onset of the invalidating Parkinson disease he officially was diagnosed with in 1994, and which has resulted in him apparently struggling economically as well being virtually crippled today. But in 1982 he was on top of his game.

Karan Armstrong (wife of the director) is a touching Elsa. Her high notes are somewhat fluttering. But her overall portrayal is rather moving. And while Elizabeth Connell vocally can sing the part of Ortrud, dramatically she is too placid. Leif Roar makes slightly more impact as Telramund without being overly impressive. Siegfried Vogel is a static King Heinrich, but in fine voice

The Bayreuth Festival Orchestra under Woldemar Nelsson is solid, but ultimately unspectacular.

The production is probably too static for many to fully appreciate it. However, for those wanting a traditional production, the recently released Herzog Bayreuth Lohengrin may be worthwhile.

For those not opposed to Regietheater, Lehnhoff´s Baden-Baden staging as well as Konwitschny´s class-room Lohengrin may be worth checking out.