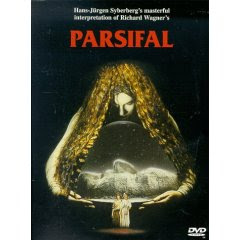 Originally Hans-Jürgen Syberberg intended to create a film about Richard Wagner. Gradually it developed into a film centered around Parsifal and with references to Wagner´s life and philosophy. Thus, this Parsifal DVD is not merely a video representation of Parsifal, but a film in its own right, though the opera Parsifal serves as the sound-track.

Syberberg originally intended a Bayreuth Festival performance of Parsifal (audio only) to accompany his new film, but after his 1976 film on Winifried Wagner (including her infamous comments on Adolf Hitler) he had hausverbot on the Green Hill, so he commssioned a new recording with Armin Jordan (father of Philippe Jordan) conducting the Monte Carlo Philharmonic Orchestra.

This is mainly a film paraphrasing on Parsifal exploring backward as well as forward associations of the work such as the Holy Grail and the Third Reich. Released in 1983 (the centenary of Richard Wagner´s death), this Parsifal is filmed entirely in a indoor studio in and around a replica of a giant death-mask of Richard Wagner serving as both the mountain from which the grail emerges and Klingsor´s Castle, as well as simply being the shape on and around which the characters move.

In the most controversial single aspect of the film Parsifal changes sex (from boy to girl) after being kissed by Kundry, for which no complete explanation is provided by Syberberg.

Syberberg originally saw the soundtrack as a seperate entity to the film and for practical (as he generally found actors more suitable than singers to convey the approprate emotions on film) as well as philosophical (he wished to separate body and voice) reasons, most parts were cast by actors. Only Aage Haugland (Klingsor) and Robert Lloyd (Gurnemanz) acted their part on screen as well as on the soundtrack. Not to speak of the most curious casting of the conductor Armin Jordan as Amfortas. Syberberg regarded Kundry as the center of Parsifal, played by the fabulously expressive German actress Edith Clever.

For the historically interested, well-educated and informed in all disciplines of the arts, the allusions and references in this film are enormous ranging from Ancient Greek to renaissance painters and architects, 19th century philosophists to individuals from Richard Wagner´s own circle of acquaintances (such as Mathilde Wesendonck as a flower maiden) as well as to Wagner´s other work. Just to identify half of them requires several viewings.

Musically, Armin Jordan´s Parsifal is well-conducted and the performances are strong, the singer-acted ones from Robert Lloyd (this early in his career almost without that irritating nasal sound) and Danish bass Aage Haugland in particular.

In short, this is a highly sophisticated film. Is it indispensable? For those seriously studying the various aspects of Richard Wagner and the related performance practices, yes. For most of those just generally interested in Richard Wagner this will be worthwhile watching at least once as well.

Excellent review. Too bad the DVD just went out of print. Hopefully they remaster it and release a better transfer with lots of extras.