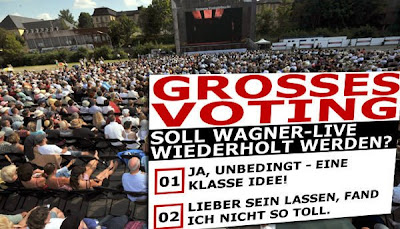 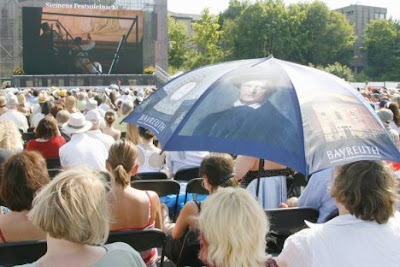 Approximately 38.000 turned up for the free live transmission of Sunday´s performance of Katharina Wagner´s Meistersinger from the Bayreuth Festival to a public square in Bayreuth - undoubtedly helped by the spectacular weather as well.

Opinions of the success of the not exactly free online streaming seemed to vary (I opted out of buying a ticket since the weather was spectacular and I saw this production live in Bayreuth last year). This Sunday July 27th performance is NOT the one to be released on DVD later this year, which was recorded before the Festival started.

Selected impressions of the 2008 Meistersinger revival:

Associated Press: "Whether you love it or hate it, there's no denying that there's never a dull moment in Katharina Wagner's uproarious production of "The Mastersingers of Nuremberg",, "Katharina's staging of Wagner's only comic opera is hugely entertaining and has some bright and striking ideas".

Frankfurter Allgemeine: "Bayreuth is pop and Katharina Wagner is the princess" .."the staging tends to be too explicit".

Netzeitung: "The Bayreuth audiences are still divided over this staging"

Based on the radio transmission: Sebastian Weigle was fine, though not exceptional, with a rather placid reading without the contrapuncts making this score really exciting. Futhermore the coordination with the singers was rather shaky during the ensembles. Best among the singers were Michaela Kaune (Eva), Klaus Florian Vogt (Walther) and Michael Volle (Beckmesser). Franz Hawlata is not a bad Sachs, but seems rather stretched by the part.
Posted by mostly opera... at 20:36