The ENO Rusalka on DVD 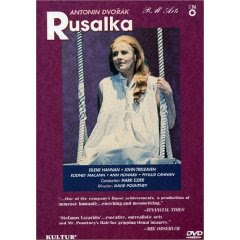 David Pountney has created a Freudian Rusalka set in a Victorian house, with Rusalka a young girl on the verge of woman-hood and sexual discovery, daydreaming at night in her bed-room. In comes the guvernante (Jezibaba) and also her grandfather in a wheel-chair (the Water Spirit). She then goes on to have a brief affair with a man (The Prince), who eventually rejects her. However, he is the one lying dead on the floor when the opera ends. All in Rusalka´s imagination.

Perhaps this concept could have worked if the sets didn´t look so dusty and if the singers had been more involved actors.
Eileen Hannan has a nice voice, but with a much to small dynamic and expressive range to make an impression as Rusalka. Ann Howard was more a nanny than a scary witch. Best was the young John Treleaven as a rather fine Prince.
Last and worst: The orchestra just didn´t flow under Mark Elder and sounded dull and predictable.

As always with the ENO, the performance is in English, another draw-back in my opinion (texting available, though).

This is not recommeded. Especially not with the excellent Paris production with Renée Fleming available on DVD. For those not interested in the Renée Fleming version, I´d just recommend waiting for another release as these two are the only presently available Rusalka DVDs.