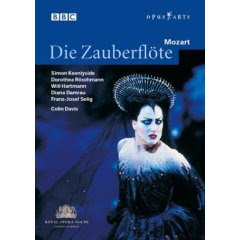 David McVicar plays it relatively safe with this Magic Flute production for the Royal Opera. The stage is virtually bare and dark surrounded by occasional pillars and fractions of black marble walls often covered in a mysterious mist. Costumes are eclectic, ranging from the 17th century until present day and includes glitzy gala dresses as well as workingman outfits. The occasional moon or stars pop up in the background as well as semi-imaginary applications like a red tree with blue leaves. Elements of children´s theater, such as a bird being moved by an actor and a mâche dragon contribute to the overall exquisite and fairy-tale impression of this elegant and underplayed staging. Almost too polished and smooth, one may argue, but otherwise hard to criticize.

None of the principals are less than good (well maybe one is) and some are frankly outstanding, mainly Simon Keenlyside and Dorothea Röschmann.

Simon Keenlyside´s Papageno is a weary working man (bird-catcher) and not the ridiculous figure he is often made out to be. Instead he is rather awkward. His dry voice and excellent physical acting makes him ideal for this part, the best I have seen him in. Will Hartmann is a rather stiff actor and seems strained vocally as well in the thankless part of Tamino, who furthermore suffers by being completely upstaged by Simon Keenlyside.

Dorothea Röschmann is a superb Pamina, mainly because she is stylish and unsentimental. And apart from having a beautiful voice, she sings and acts with a firm character unusual for the often wining Paminas.
I belong to what I suspect is a minory not particularly taken with Diana Damrau, finding her voice uninteresting and her presence rather irritating. However to say that vastly better Queen of the Nights walk around out there, I cannot do either..

Franz-Josef Selig is simply not a very good Sarastro. That he lacks the majesty and gravitas of the truly great is one thing. Worse, however, he is rather wobbly and has trouble in both ends of the register.

No doubt that Sir Colin Davis is a fine Mozartean with a rather transparent and elegant approach, not unlike Claudio Abbado. As someone still swearing to Otto Klemperer´s dense interpretation, I´d personally prefer Riccardo Muti from the 2006 Salzburg production. being the most direct competition on DVD as well. Cases made be made for owning both productions, especially for fans of the Magic Flute.

I find the weaknesses of Hartmann and especially Selig too hard to overlook and it interrupted the immersive experience I expect from a DVD. As a result, I find myself hitting the fast-forward button and thus consigning the DVD to the stack of those I use for sampling particular singers. By the way, Selig is due to play Sarastro in Muti's Salzburg production this August.
I find the Welser-Most 2000 Zurich version to be a much better balanced and therefore coherent ensemble, and as a result far more enjoyable as a production to be viewed in its entirety. And the fact that Salminen is a wonderful Sarastro (finer than Pape IMO) and Scharinger an excellent Papageno is the cream on the strawberries.
Not that it doesn't have some issues (the Tomb Raider set is a bit clunky - I keep expecting a cookoo to spring out of one of the portals, and there is at least one occasion where the chorus is badly out of step with the conductor. Not to mention the dodgy English subtitles). But none that make my thumb jab on the fast forward button.
From your review, the Muti Salzburg DVD looks like it might keep my fast forward thumb in check.

"I find the weaknesses of ...especially Selig too hard to overlook"

Yes, and for this reason I doubt I´ll be watching this again.

"By the way, Selig is due to play Sarastro in Muti's Salzburg production this August."

For which I have a ticket..

"And the fact that Salminen is a wonderful Sarastro"

He is. Looks like the Paris production with Dessay, Röschmann and Salminen is upcoming as well. Another great Sarastro is Stephen Milling.