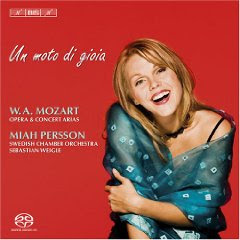 Considered she is a classical lyric Mozart soprano, Swedish soprano Miah Persson´s (born app. 1970) rise to fame has come relatively late, career breaking performances being the Salzburg 2003 Rosenkavalier and the London 2006 Nozze di Figaro, both released on DVD. She is currently on a rapid rise to become perhaps the pre-eminent lyric Mozart soprano of today, specializing primarily in Mozart.

The upcoming summer she will repeat her Glyndebourne Fiordiligi at the Salzburg Festival and next season will see her Metropolitan Opera debut as Sophie in Rosenkavalier.

This Mozart disc clearly shows that Miah Perssons success is not primarily based on her great looks and acting: She is quite simply a great Mozart singer. Stylish, but most of all charming and lively, but still with plenty of character and punch. With the effortless coloratura always integrated in the music interpretation and never put on display.