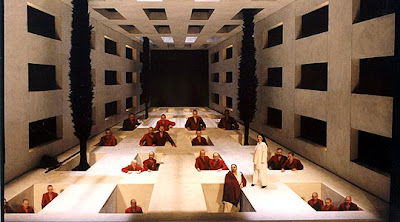 This stylish 1995 Stéphane Braunschweig Fidelio production is so old, that the singers seem left on their own in creating their characters in the very stylish environment mainly consisting of variations on the white cellars, as seen on the above photograph. This is one of the productions, which look better on photographs than seen live, where it tends to get rather static.

Angela Denoke both looks and acts superbly as Leonore, however as a rather lyrical voice, she is quite overchallenged in the big moments - no less so than Waltraud Meier last week, apparently.

Christof Fischesser, whose sorry job it is to sing all René Pape´s parts when he is not around, is actually a very good Rocco - fine voice, fine actor, looks fine. I´d be curious to hear how the King Marke´s he is doing at the moment shape up. Falk Struckmann plays himself as ever and barks more than sings Pizarro.

Last and definitely worst: Johan Botha simply delivered one of the most disgraceful performances I´ve ever seen by an international opera singer. It may be politically incorrect to say so, but this man is simply to large to be standing on an opera stage. Secondly, he makes no attempt to act. Even for those not caring about these issues, he was off-pitch for his entire aria, with a strange vibrato. And since Florestan is virtually a one-aria part, there is not much left. Rather worrying that Daniel Barenboim casted him in this, as he tends to work with the same singers, bearing in mind his upcoming Ring. At least Barenboim conducted the performances last week, so he will have seen this himself..

Karl-Heinz Steffens is not a bad conductor, but when you know how this Fidelio sounds when Daniel Barenboim conducts it, it´s hard to be overly enthusiastic. Though he probably cannot be blamed that the Staatskappelle seemed to take a day off.

I saw Botha last year singing Walther at the met and his singing was quite good. His acting was less than standard but didnt't conflict with the most than traditional production... I don't think he can really move. But as far as the singing is concerned, it was perhaps a bad evening. In fact, I never heard live a performance matching my Fidelio recordings. (Seiffert in Vienna, Jerusalem in Paris in no way gave me the thrill I feel listening to Vickers or even Windgassen).

Vocally, he may have had a bad evening as I´ve heard him several times being fine.

However..there is NO production in which I would find Johan Botha anywhere near acceptable. Who wouldn´t prefer anyones´ Hans Sachs or Filippo or Hunding to Botha´s Walther or Don Carlos or Siegmund? Such casting simply takes all the potential drama out of these pieces.

When I refered to Struckmann on an earlier post as not being "that horrid" I was writing of his Pizzaro in the Met Fidelio of 2000 (the one time I have heard hime live). I gather his voice has not gained in beauty since that time.

Around that time he was rather fine, actually. I heard him as an excellent Dutchman with Barenboim in Berlin in 2001. Since then it has been somewhat downhill vocally, though he is much better in the house than on recordings.

I remember hearing him as Telramund in Vienna two years ago, he clearly was indisposed though nothing was announced, progressingly losing his voice to the point where he could only whisper "So zieht das unheil in dies haus" - the most dramatic event of the evening.

Btw. I saw that Fidelio last year in London with a superb Karita Mattila. Best Fidelio production I have seen. Though the overall MET cast was better, for obvious reasons..

I'm very surprised at your "fattist" remarks regarding Mr. Botha. Would you have discounted Pavarotti or pre-op Deborah Voigt for similar reasons? Botha may not be Olivier but he's no worse than many singers at acting. Also having heard him sing several Strauss roles (including the impossible Apollo and Kaiser) triumphantly I, for one am prepared to put up with his girth. there have, incidentally, been glowing reports of his Siegmund.

"Would you have discounted Pavarotti or pre-op Deborah Voigt for similar reasons?"

Your choice I suppose but also your loss. I heard Pavarotti in his prime in several roles and I don't expect to hear those roles better sung in my lifetime. In the end opera is prima la musica IMHO.I don't care how brilliant an actor a singer is if they can't sing the role but I am prepared to put up with rudimentary acting if the singing is sublime.