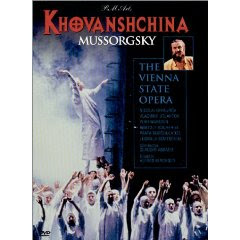 First of all Mussorgsky died before he finished this opera (Abbado uses the Stravinsky version prepared for Diaghilev for the final scene). Secondly, he never got to orchestrate any of it. As with Boris Godunov, Claudio Abbado opted for the Shostakovich orchestration (as opposed to Rimsky-Korsakov´s). In brief, Claudio Abbado is without doubt the finest interpreter of Mussorgsky I´ve heard. Back in 1989 when he was music director of the Vienna State Opera he was much more forceful than in his later years, revealing the full dephts of the score in what is one of his finest recordings.

Normally, I´d say the musical interpretation is not enough to override an uninteresting production, when DVDs are concerned. And as I am not overly fond of either Kirchner´s production or Nicolai Ghiaurov´s Ivan Khovansky, I have previously opted for the Abbado Khovanshchina CD, which is musically even finer than this DVD with almost the same cast, the notable changes being Aage Haugland as Ivan Khovansky and Marjana Lipovsek as Marfa. The undisputed top CD choice for this opera. Gergiev, despite a fine performance on his own recording, comes nowhere near the level of Claudio Abbado here.

However, those not familiar with the action and/or Russian, may find themselves in a situation not unlike my own: That I know the music of the opera extremely well, but have only a vague idea of what Khovanshchina is actually about..At which point a DVD comes in handy.

Which leads to the point, that even if Kirchner´s production may not be exactly revelatory, it is not repulsive either, and is sufficiently straight-forward to communicate the plot to the viewer. Generally, the sets are geometric, neutrally coloured and unassuming yet surrealistically eerie and contrasting with the colourful period costumes of the singers. Kirchner makes no attempt to reinterprete the work, but seems to leave the spotlight on Claudio Abbado. Which is where it belongs.

Nicolai Ghiaurov is some way past his prime, but still convincing, though nowhere near Aage Haugland´s Ivan Khovansky on the audio recording. On the other hand Anatoli Kocherga was in top shape and it is no wonder Abbado chose him for his later Boris recording. Paata Burchuladze was a resounding Dosifey, caught in his rather short prime. Ludmila Semtchuk was a convincing Marfa, both beautifully sung and acted. And finally Heinz Zednik, the famous Bayreuth-Mime, made the most of the small part of the scribbler.

As one of the most beautiful operas of all time, I´d strongly recommend this DVD. For some years the only choice on the market until the release earlier this year of Stein Winge´s production from Barcelona Liceu. However, this Claudio Abbado Vienna production is far superior, both musically and dramatically.

A video clip from the DVD may be seen here.

Heinz Zednik was not the only reminder of The Ring for me. The three Persian slaves slobbered over by Ghiaurov were eerily reminiscent of Alberich and the Rheinmaidens.
Really excellent DVD.
Gerghiev gave an acclaimed performance of this opera at the Met in 2002, but it's not available via the Met's new opera on demand service. Presumably it wasn't taped for video?

I don´t think it was taped, but don´t know for sure. It is my impression that Khovanschchina will reappear at the MET within a couple of seasons - whether in a new production or not I am not aware.