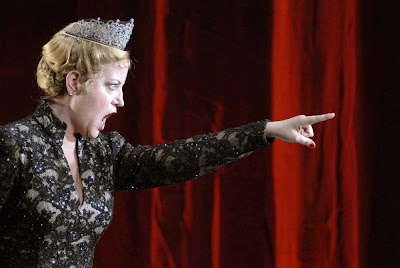 Despite some fine ideas by Lorenzo Fioroni in this season opening production of the Deutsche Oper Berlin, they do not overshadow the fact, that the setting of Turandot in a look-a-like East-German movie theater of the 1970´s is less than inspiring, no matter his reasons (display of emptiness and brutality etc.) for doing so. Turned towards the audience, the people closely follow the story of Turandot, which take place on a stage, with the rulers placed at an open window frame at the back wall of the theater, true totalitarian style. The sacrifice of Líu is central to Fiorini, which probably explains why she is suspended in the air hovering over Turandot and Calaf in the final scene (Alfano version). What then motivates Calaf and Turandot to kill both of their fathers, seems less obvious.

Lise Lindstrom, previously unknown to me, is quite spectacular as Turandot. The brilliance of her top is virtually unsurpassed, there is no vibrato to speak of, she is on pitch, she looks great and also acts well. In short: She should be able to make a world career with this part. That her middle register is somewhat dry seems insignificant considering all her other virtues.

Isn´t it always so that Líu ends up the most applauded character in Turandot? Though fine, I didn´t find Inna Los quite as spectacular than the general audience seemed to.

Pinchas Steinberg conducted one of the finest performances I´ve yet heard from this orchestra - when they play like this, they definitely level with the competing Staatskapelle, especially when Daniel Barenboim is not there.

Good to know! Lindstrom will be Venus next to Treleaven at the Athens Tannhauser in January-in the Graham Vick SFO production!

The production where Wolfram strangles Elisabeth, I believe..

Strangles???? Are we gonna have drama???

"Left behind, Elisabeth, struggling to maintain faith, sick at heart and longing for death, finally expires, as sopranos sometimes do in opera. But in this staging she begs Wolfram to end her misery, and the anguished knight strangles her."

Excerpt from a very typical Anthony Tommassini review from the NY Times - in full here: http://www.nytimes.com/2007/10/09/arts/music/09wagn.html?n=Top/Reference/Times%20Topics/Organizations/S/San%20Francisco%20Opera

There should be plenty in there to shock Athens audiences.