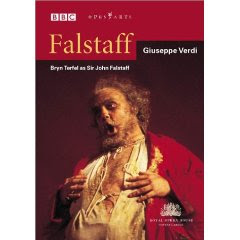 Graham Vick has created a wonderfully imaginative Falstaff, chosen for the reopening of the renovated Covent Garden opera house in 1999.

The production is traditional as it follows the libretto rather closely. However, the production looks far from traditional. Set in sparkling primary colours, the world of Windsor is seen through distorsion glasses and with crooked perspectives. An example is the huge red trampoline bed tilted towards the audience on a floor with several trapdoors (Falstaff´s room).
The stage direction is flawless, capturing the sparkling and lively essence of Falstaff in what is clearly the best Falstaff production on the DVD market.

This is Bryn Terfel´s finest hour. As Falstaff he is virtually beyond both criticism and comparison, not only among the singers of today, but venturing quite a while back in history as well.
Wearing a very realistically looking latex body-suit with a huge belly, some may feel that the buffo element of Falstaff´s character is over the top, however Bryn Terfel´s characterization and acting is simply superb. Based on his performances in the heroic-bass-barytone parts of Jochanaan, Dutchman and Wotan (as well as Scarpia and Don G as the Don), I´ve never quite understood his appeal. However, watching his Falstaff, it becomes quite obvious what has made Bryn Terfel the star he is. In all regards, a tremendous achievement, which will undoubtedly stand the test of time unlike the heroic parts he unfortunately prefers to sing today.

Barbara Frittoli is simply perfect as a young and very playful Alice Ford - she is both good-looking as well as a terrific actress in superb voice. There are no weak links in the supporting cast.

Falstaff is very much the conductors opera. And without Bernhard Haitink sparkling in the pit the production would have been a failure.

Apparently this DVD has received an 'R' rating in the US due to Falstaff's giant erection, meaning that children can watch it but it is recommended that parents guide them. Consider yourselves warned...