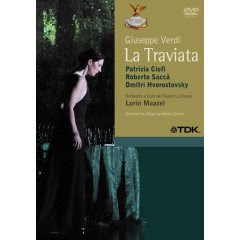 This Robert Carsen production of La Traviata was chosen for the reopening of Teatro La Fenice in 2004, the place of the Traviata world-premiere in 1853.

Robert Carsen´s concept is strong: This Traviata is about prostitution as a phenomenon, not about Violetta as a person. His view is a cynical one, in which all the men only are interested in Violetta´s past, present or future potential for providing sexual satisfaction.

The action is transferred to the 1970´s. Violetta is a celebrity prostitute. During the prelude she is payed for her services. Alfredo is a paparazzi photographing her right from the beginning at the sleazy party where they meet. He keeps photographing her amidst a floor covered with money-resembling-leaves in Act 2. Money is continuously thrown around. Also Germont pére is willing to pay for Violetta´services. Sex and money is not subtly hinted at but blatantly put out.
Flora´s party takes place in a nightclub with ditto dancers. In the end Violetta sits in an empty warehouse flipping through her photos - her empty life as a celebrity prostitute is over.

I find the concept extraordinarily inventive and well-executed, but as most will have guessed by now: This is not a traditional La Traviata. For a traditional production, look here.

Patrizia Ciofi is a compelling Violetta, primarily through her vocal as well as physical acting. Her voice is not particularly beautiful and furthermore she tends to be sharp, but she delivers a very convincing portrait of Violetta´s transformation from self-absorbed prostitute to dying woman.

Dmitri Hvorostovsky seems more engaged than usual and while he physically is completely believable as the photographer, vocally Roberto Saccá is the weak link of the production.

Lorin Maazel, who apparently did not like the production, nevertheless conducted an excellent performance.

Finally: Why do all TDK releases have such boring covers? One almost does not believe that the content may be interesting.

Well... Sacca is really impossible. And I don't take to Ciofi's voice...

Fleming is vulgar as usual. It is grace and poise for the middle west. You heard her "dellAEAEAE TraaviaTAEAEAE" ? Those open sounds? Awful. And this hairstyle...

I couldn't look at Mussbach's production until the end (I am not an anti-Mussbach, I loved his Salome). No story. No singers. (Delunsch is not very popular in France...except when singing Britten). But reading your review, I'll try once more.

Netrebko is absolutely marvellous. Listening to her, I have tears rolling down my face, and Villazon is moving too...I give all my votes to the Salzburg production.

Yeah, Netrebko is absolutely marvellous. That is of course if she could really sing Violetta. 'Cause she can't...Her pronounciation is terrible, her coloratura is...well, strange, the only thing I like about her in this Traviata are the dramatic climaxes and her fantastic stage presence...

You can't have it both ways... Netrebko is not a coloratura soprano but a dramatic one. In my opinion she is perfect in Gounod's Juliette. And singing Juliette and singing Violetta...well, it is not the same thing.

Sure, I would never recommend the audio version of the Salzburg production. But we are not dealing with CDs but with DVDs...

If she were a dramatic soprano she would sing Gioconda, Tosca and Abigaille. But she is not. So, she can't sing Elvira in Puritani (the dvd is ridiculous), she 's a great Violetta on stage but she doesnt do justice to the partitura, she's a good Juliette and Manon- i have to agree with that... And regarding the "we are not dealing with CDs but with DVDs" thing...well I 'm a fan of "Prima la musica e poi le parole". Isn't that a general condition applied to opera?

Well... I am half ok with you but only half.

I didn't see the Puritani DVD but the Netrebko's mad scene I found on youtube is not very good. Anyway, as far as the bel canto techniques are concerned. But maybe things are changing. I saw her live in Paris in june in Bellini's Capuletti, and she almost found Caballe-style high notes! Giuletta is clearly not a coloratura role like Elvira but Netrebko gave a subtile interpretation of a kind we were not used to.

About dramatic roles. Personnally I don't care about Gioconda and Abigaille is a particular case. I don't know how to express that( my english is what it is...)
but even dramatic sopranos have found their voice in tatters having sung Abigaille. And for Tosca... I do not see why she couldn't sing it. And on stage, she will be great.

I agree with "Prima la musica". I belong to the vinyl and CD times and have learned to love opera without the slightest idea of the way the singers behaved on stage. But I am not applying the same criteria to DVD. If I was, I wouldn't buy DVDs. To take Wagner as an exemple, I would listen on and on to Hotter, Mödl, Varnay (and so one...) and wouldn't give the least attention to the modern productions about which our hostess here give so interesting reviews.

Recently on this blog, there was a good example. About Die Frau ohne Schatten, we were discussing about the respective qualities of the Salzburg production and the Nagoya one. But if we concentrate on music exclusively, there is nothing to discuss. The only solution is to buy Solti's CD and to forget the DVDs. And with Traviata, the situation is not very different...

Parsifal, I am surprised to hear this from you..I don´t agree with you. On CD, of course. But live and on DVD, no.

In short: I want good-looking/attractive singers who can both act and sing. If a singer is grossly overweight and/or is completely uninteresting to look at I do not care how well they sing. Looks matter - both in opera and in real life. Am I superficial? I don´t think so.

I´ll have to admit to rather liking this development in opera towards increased focus on acting and appearances.

I was listening to the Capuleti cd with Anna and Elina today while back from work and I thought too that it was marvellous. Especially Anna!! Terrific, I kept listening to Ah Quante volte over and over again.

Mmmm...well, I had the chance to listen to many singers of the old school live...From Caballe and Pavarotti to Baltsa and Tomowa-Sintow, and I know that the CHILL that the voice can give you, cannot be given by looks nor by a good stage presence... Of course i enjoy looks, of course I enjoy a good actor but if a had to choose between Deutekom and Netrebko as Elvira in Puritani I would definitely choose Deutekom even if she looked like a whale...

Parsifal - we will have to agree to disagree on this. I have actually heard several of these singers live as well, and it´s not just about looks, it´s about drama as well...Pavarotti has none of that, in my opinion and that´s why I find him completely uninteresting. The same applies, to the others you mention except Agnes Baltsa. I am surprised you put her in that category. I don´t think she belongs there. She was completely electrifying on stage, in my opinion (that I am sure we agree on!)