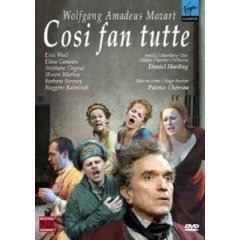 Patrice Chéreau is one of the very few film directors, that truly excels in both film and opera. His trademark is the extremely thorough analysis of the text as well as the individual direction of the singers. Both of which he uses to maximal effect in this Aix-en-Provence production of Cosí fan tutte from 2005.

"Why shouldn't Cosi be something other than bubbly and light-hearted? And why shouldn't one take seriously everything that Mozart and Da Ponte wrote? For Cosi deals with complex issues, speaking to us of the all-pervasiveness of desire, showing us that one can have love for more than one person at a time and that there is infinite sorrow in discovering this, and some little sweetness in accepting it, and furthermore that Alfonso knew all this, and that he had a natural vocation to torture those unhappy souls who did not know it..."

And this is exactly what he delivers. There is nothing funny or lighthearted about this Cosí fan tutte, both modern and classical at the same time, and remarkably bittersweet.

All are in period costumes on a virtually bare stage, in fact a rustic storage backstage room complete with telephones, fire extinguishers and a sink along the walls. Not to mention the VIETATO FUMARE sign on the wall. Designed as always, by Richard Peduzzi, Chéreau´s usual set designer. In the end everyone is confused and lost, holding hands and walking around in circles on stage. And rightly so: This uncomplicated partner-switching always seemed rather silly to me.

For once, Dorabella is the more sophisticated and assured of the two sisters, as well as being the more spontaneous which explains her being the first to "give in". An interpretation underlined by Elina Garanca´s superb performance, which overshadows Erin Wall´s more anonymous, though fine Fiordiligi. And the voices of Wall and Garanca blend together extraordinarily well in the ensembles. Though a fine artist, Barbara Bonney doesn´t make a particularly good Despina and was in rather dry voice. The men were more anonymous, except Ruggero Raimondi´s Don Alfonso - for once an Alfonso in fine voice, though Raimondi obviously is past his prime as virtually everyone else cast in this part. All accompanied by an engaged Daniel Harding in the out-door pit.

I had the luck to see this production in Aix and I am very happy with your review. French critics were harsh on Chereau, writing he was not bringing anything new to this opera. I do not think bringing something new was in Chereau's intentions but it is clear he made his characters live on stage with an intensity very few stage directors can obtain. And the feeling of fate, as long as the story goes on, is permanent.

The critics have been terrible too about Harding, and I really don't understand why. Maybe people are waiting for a more "velvety" sound in Mozart. Anyway, I liked his dynamics.

Garanca is the obvious star of the cast. Wall and Mathey are vocally standard but it works. Barbara Bonney has been a charming singer but her voice is not only dry... There is no more voice to speak about...