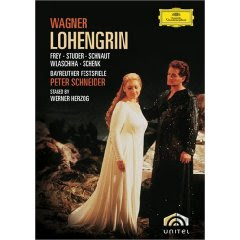 Werner Herzog is renowned as one of the leading German film-makers of his generation. After seeing this Lohengrin, you are once again confirmed that the elements of successful film-making apparently differ from those of successful opera-making. Werner Herzog retorts to old-fashioned gimmicks he´d never dream of using in his films and genuinely seems far too respectful of the operatic medium to create something genuinely interesting.

Apparently Herzog was told by Wolfgang Wagner to apply "no trendy antics - the production has to stay for 5 years". To which Herzog responded with an utterly conservative romantic recreation of the middle ages.

Werner Herzog recreates the primitive 10th century northern-European setting of Lohengrin. The open air of Act 1 with stone circles in the mist is similar to the gatherings of the Icelandic Sagas. Lohengrin arrives through a laser spiral of smoke - as he would in Ancient Northern Europe.
In Act 2 we are by a mighty black lake. Though the castle in ruins by the lake is hardly an intrinsic element of the 10th century..The open-air wedding in Act 3 takes place in a landshape astonishingly similar to that surrounding Erik the Red´s settlement in Greenland.

Nature plays a major part in the production - the mist of Act 1, the mist and snow of Act 3, the darkness in Act 2 - only for Elsa´s wedding do we see the sun. Symbolically, Ortrud and Elsa reach out to each other in the snow-covered end, with Elsa´s ghostly brother in the background.

There is more than a touch of kitsch to this staging, which more than occasionally smells of plastic and of the landshapes of a zoological museum complete with prehistoric animals.

To complete the production, Herzog wanted to encircle the Bayreuth Festival House with stones, something Wolfgang Wagner however vetoed...

On paper this production sounds rather interesting. It isn´t. It is very static, the direction is dull and there is no real interaction among the characters.

Cheryl Studer is clearly the best of the cast as a superb, floating and warm Elsa. She tries, but there is no chemistry between her and the extraordinarily boring Paul Frey. A lyric, unheroic Lohengrin, he is both vocally and dramatically uninteresting. They are opposed by the rather wooden villains of Gabriele Schnaut and Ekkehard Wlaschiha.

It´s hard to say anything really negative about this production. On the other hand, it is equally hard to be enthusiastic. Exciting theater, it is not. But it will offend very few.

And for quite a few, it may be the preferred Lohengrin on DVD - that is for those preferring a traditional Lohengrin, but not being particularly attracted to the dark Vienna Abbado/Domingo production or the rather undead Metropolitan production.

The Germans would say "Schade, Schade...". Studer is exceptionnal. Werner Herzog's production is really poetic. The villains are better than the notes you give them , in my opinion. But you can't look at a Lohengrin without Lohengrin...

"But you can't look at a Lohengrin without Lohengrin..."

Oh but you can. I always tend to skip his scenes. However you cannot look at a Lohengrin without some decent villains..

I totally disagree about Ekkehard Wlaschiha; I think he's utterly fantastic. I agree he doesn't use gestures as much as he might, but his VOCAL acting nails the character. And you want chemistry--his interactions with Gabrielle Schnaut are masterful.

I thought Schnaut was the real star of this performance. The only Ortrud I've ever heard sound this evil is Astrid Varnay. And Schnaut's acting is so creepy and her long, horse-like face is so expressive.

One other outstanding vocalist deserves mention: Eike-Wilm Schulte as the Herrufer. Every phrase is a lesson in correct use of head-voice in declamatory singing. Beauty equals power.