Elektra on DVD: Birgit Nilsson and Leonie Rysanek from the MET 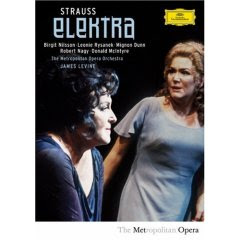 Birgit Nilsson was 61 at these Metropolitan Opera performances of Elektra and understandably far from her peak, at several points strained and worn out and her pitch occasionally wavering, but it´s still more than worthwhile to get an impression of her Elektra on stage. This was one of Birgit Nilsson´s last performances at the MET (she performed the Dyer´s wife a couple of times the year after).

Though it is almost even better to see the great Austrian soprano Leonie Rysanek, also somewhat past her prime at 54, but surprisingly steady and on-pitch (she had a tendency to be very sharp) considering she had a high fever and went on stage only as a favor to Birgit Nilsson. The Chrysothemis (and Empress) from her prime still has not been surpassed or even equalled. The elegant Mignon Dunn was in fine voice as Klytemnestra. Donald McIntyre seemed rather dry as Orestes, dramatically as well.

Dramatically this performance is less convincing and the singers obviously cannot be blamed for coming from a generation where opera singers stand still on stage. Even so, the intensity that brought Leonie Rysanek much of her fame is visible.

Excellent as well as rather loud performance from James Levine, once again making one wonder why Wagner gets such a passive treatment from him, as he seems to have no problems pulling out the stops in Richard Strauss.

The production itself is very dark and cavelike and deserves no further mention.

As a document to Birgit Nilsson and Leonie Rysanek on stage this is worthwhile. To hear them both in their prime in Elektra, the broadcast of the 1966 Metropolitan Opera Elektra should be sought out.