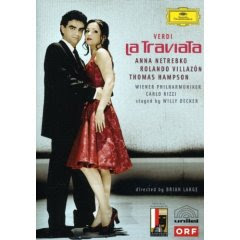 Willy Decker ´s 2005 Salzburg Traviata is both simple and aesthetic: The oval stage is surrounded by a semicircular wall, the only decorations being the occasional pink couch and a chair. The few remaining hours of Violetta´s life are symbolized by a giant clock, counting down mercilessly at varying speed, while Violetta in vain tries to stop it. With the doctor appearing in the opening scene we immediately know that this is Violetta´s final count-down.
The story is told relatively straight-forward from the sole male chorus in Act 1 underlining the pink-dressed Violetta´s status as a prostitute.

Rolando Villazón´s neurotic, hyperactive adolescent acting is perfect as Alfredo and the intensity of his performance as well as the stage chemistry between him and Anna Netrebko cannot be improved upon.
Anna Netrebko is virtually ideal as this Violetta, desperately trying to stop the clock counting down to her death. Vocally she has a wonderfully direct way of singing and an identification with this character that leaves most of her colleagues far behind. As Germont pére, Thomas Hampson was rather disappointing, both sounding and acting stiff and wooden.

Whether this staging also will work with less charismatic singers in the leading roles I am less certain about. Extensive rehearsal footage is available with the DVD.

The toast from Act 1: