DVD: Missa Solemnis - the reopening of the reconstructed Dresdner Frauenkirche 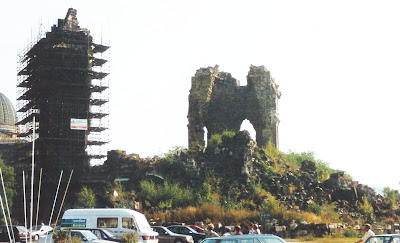 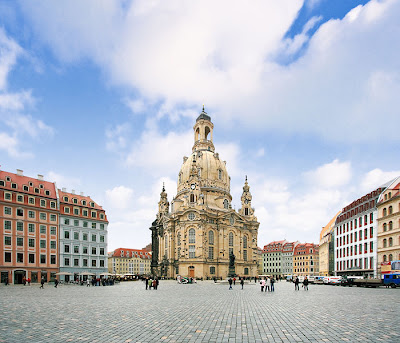 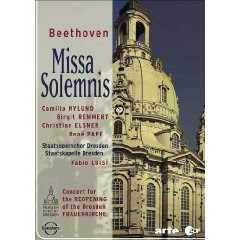 This DVD is as much about the reopening of the reconstructed Dresdner Frauenkirche as it is about Beethoven´s Missa Solemnis. Otherwise, I don´t think I would have written about it, as my knowledge of Missa Solemnis comes dangerously close to the lower limit of what I find appropriate to put in writing as I simply do not understand the work.
However, Dresden, the most beautiful city in Germany, I know well and the story of the reconstruction of the Dresdner Frauenkirche is fascinating:

During the bombing of Dresden by the Allied on February 13th 1945, the landmark of Dresden, the Lutheran Cathedral Frauenkirche, initially seemed to have survived though completely burned out. However, one day later, the entire church including the famous dome the Stone Bell (die Steinerne Glocke) collapsed. From then on, the ruins of the church remained a virtually untouched grass-covered pile in the middle of the city center of Dresden until 1974 when the meticulous reconstruction to recreate George Bähr's original 1743 church begun. It was a tremendous effort, and the approximately 217 million dollars required were raised entirely by private funds.
The greatest single contribution came from American German-born Nobel Prize winner Günter Blobel, who saw the original Frauenkirche as a boy and donated the Nobel Prize money of 1 million dollars to the reconstruction of the church (and a synagogue) in 1999.

The reconstruction of the Dresdner Frauenkirche took more than 30 years, with a vastly intensified effort after the unification of Germany in 1990 and the rebuild Frauenkirche was consecrated in October 2005. This live performance of the Missa Solemnis took place one week later, on November 4-5th 2005. The church is one of the finest examples of baroque architecture anywhere. The Neumarket around the Frauenkirche has also been rebuilt and everything looks baroque picture perfect.

There is plenty of history conncected with this Missa Solemnis performance as if the reopening of Frauenkirche was not enough: Dresden was the first place in a German-speaking area to see a performance of Beethoven's Missa Solemnis (partially in 1829, complete in 1839 - the world premiere was in 1824 in St Petersburg). Furthermore, the Dresden Staatskapelle is one of the worlds oldest orchestras, dating back more than 450 years to 1548. Fabio Luisi is principal conductor of the Staatskapelle (from 2007).

To take a step backwards from this poignant history lesson: Orchestral works are rarely interesting to watch on DVD, as I don´t find the DVD medium offers any real advantage to CDs. What sets this DVD apart is the connection with the rebuild Frauenkirche, and the bonus documentary on the Reconstruction of the Church. During the performance the cameras focuse on the candy-like baroque interior architecture of the cathedral.

Musically, the performance is first-rate, though if Fabio Luisi had to compete on the CD market he would have a difficult time against the superb performances of Klemperer in particular, but also Solti, just to mention a few. The soloists are strong, Dresden native René Pape in particular, as expected.