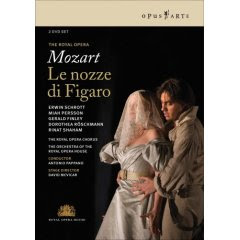 This production is clearly among the best, if not the best Figaro on DVD.

David McVicar highlights the dark undercurrent of the work in a production sufficiently traditional as not to offend anyone. The rococo charm is downplayed, however the production is far from being uncharming. The production is updated to the 1830s France, exactly why I do not know, but it is very beautiful and not unlike McVicar´s recent Manon from Barcelona.

David McVicar highlights the class distinctions of the characters and a strong emphasis is placed on sexuality and the Count's violent nature. Here, the countess appears an abused wife. The happy end for the Countess´ marriage surely is only temporary.
Equal emphasis is placed on acting, appearance and singing and the stage direction is simply superb. As is evident from the documentary accompanying McVicar´s Manon DVD, he is very much a hands-on director and meticulously directs the movements of the singers until the tiniest detail. Which pays off in spades.

What most of all makes this production memorable is the chemistry and tension. However, though the tension is highlighted, the humour is captured as well (unlike Guth´s Salzburg Figaro, where any attempt of comedy is disposed with).

David McVicar succeeds in conveying the feeling some new dimensions are discovered with this Figaro, which is no small accomplishment.

Erwin Schrott is over-all a great Figaro, but vocally he is a rather unorthodox one. First of all there is much sprech-gesang as he tends to speak his recitatives. His singing-style is rather unconventional and rough as well and occasionally he strays far away from the pitch. However, as an actor he is superb. May I add that he keeps his shirt on as well. His style takes a while getting used to, but it ends up working very well for him.

Miah Persson´s Susanna is more exquisite and delicate than most and she genuinely looks the part as a perfect match for Erwin Schrott´s Figaro.

This is the second Dorothea Röschmann Countess on DVD and she is stylish as always. Gerald Finley is a very unsympathetic count, excellent both as an actor and singer. I was less impressed by Rinat Shaham´s Cherubino as others.

Antonio Pappano was vigorous as well as precise in the pit, though not particularly inventive.
Some have complained about the uneven sound quality of this DVD. While I agree that the balance between singers and orchestra/harpsichord is occasionally uneven it did not bother me significantly.

I bought this myself in June and listened it on and on. I agree with all your comments except i wish you had mentioned also Philip Langridge who sung absolutely amazing and his acting was also fabulous.

Yes - thanks for mentioning him.

In many respects much finer - they had also worked out act 4 (the weakest part of the production) much better.

Personal I thought it simply the best performance I had ever seen of what can be a routine workhorse of the opera house.

Mostly's analysis is as insightful as we have come to expect but while I completely agree with her description of Schrott's Figaro, having seen this video and a couple of performances at the Met I can't say that it is among my favorite portrayals, excellent though it is on its own terms. In my experience I like him better as Don G and especially as Leporello.

With respect to last summer's performances, one of which I attended, I would have to say its a very close call. I do like D'Arcangelo's Figaro better than Schrott's (the made a great Don/Lep duo at the Met this year) but unfortunately found Frittoli's Countess somewhat disappointing vocally. She is a favorite singer and as a conceptually I would be inclined to prefer her Countess to that of Roschmann. In the event, I prefer Roschmann on the DVD to the actual performance Frittoli gave last summer.

Mattei is great as the Count (better than Finley who is also excellent but was, in my opinion, a better Figaro in the past) but I'm inclined to prefer Persson over Kurszak.

Again a very close call overall, but, heretical as it may seem for a Mozart devotee to say, the decisive factor for me is the conducting of Pappano whose vigour Mostly notes and which I find slightly preferable to the excellent Mackerras.

(Pappano presided over a muscailly excellent reading of Don G and I'm curious to hear Mackerras in the DVD of the same production).

FWIW, I also like Pappano quite a bit in Wagner.

In your review, you write: "Here, the countess appears an abused wife. The happy end for the Countess´ marriage surely is only temporary."

I agree with your observation about McVicars characterisation of both the countess and the count. However, there in no happy end, even temporary. The countess, like most abused wives, takes him back. The Count, like most abusing husbands, will never change.

In the third play of Beaumaarchais, the countess has a child with Cherubino ...