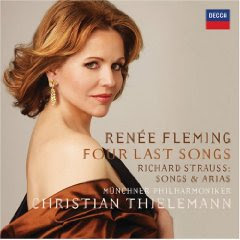 Renée Fleming has repeatedly called Richard Strauss her favourite composer and in my view she is first and foremost a Richard Strauss soprano. Exquisite and elegant, she is a great Richard Strauss interpreter, most recently seen as a superb Capriccio-Countess in Vienna.

This is Renée Fleming´s second recording of Vier letzte lieder (VLL - Four last songs), the first from 1995 with Christoph Eschenbach, with whom she also recorded an all-Straus heroines (Arabella, Capriccio, Rosenkavalier) album. At the time of her first VLL-recording she had never sung the VLL in public, now her most frequently performed concert piece.

This all-Richard Strauss album was recorded in Munich in April 2008 from a series of concerts with Christian Thielemann and the Munich Philharmonics and contains the Vier letzte lieder as well as four orchestral songs and selections from Aradne auf Naxos (track list below) and Ägyptische Helena. I attended one of the concerts in Munich (with Ariadne and some orchestral songs) and found both Renée Fleming and Christian Thielemann superb.

However, Renée Fleming´s singing on this album is generally not to my taste. Worst are the Vier letzte lieder. I find her style both mannered and artificial, she has a peculiar way of breathing with very sharp intakes of breath and there are no legato-lines to speak of. In short, I find it disappointing. She relies quite heavily on portamento, basically not a problem but together with what I perceive as artificial phrasings the overall impression is not what I would have hoped it to be. Though I am willing to cut Renée Fleming quite a lot of slack here, interpretatively she has crossed the imaginary line between elegance, sophistication and.. well, whatever is on the other side.

Much of the creamy beauty of her voice from ten years back is gone, however this was also so on her last album Homage and doesn´t apply specifically to this disc. Thus it comes as no surprise that she vocally is no match for her 1995 Vier letzte lieder disc, recorded in her prime and which furthermore comes with a much more straight-forward approach to the songs.

Interpretatively one may argue how deep she gets, both in 1995 and here in 2008 and in that regard I find no apparent differences between these two recordings.

After Vier letzte lieder, it gets better. The Ariadne selections sound less mannered, however as I hear it Renée Fleming doesn´t have the required expressive range or support in her middle register to be a great Ariadne or to carry the more expressive of the orchestral songs such as Zueinigung. Zweite brautnacht is Richard Strauss at his most tasteless, however Renée Fleming seems sufficiently challenged by the piece to minimize her mannered expressions and odd breathing. However, the orchestral songs are no match for her previous release either.

Personal preferences will dictate how one finds her in comparison to the numerous other versions of the Vier letzte lieder - such as Lisa della Casa, Lucia Popp and Jessye Norman all very different interpretations. Not to mention the all-time classics of Gundula Janowitz and Elisabeth Schwarzkopf.

Christian Thielemann however, is superb. He shines in Richard Strauss and I cannot imagine a better accompaniement that the glittering, beautiful and exquisite sound he draws from the Munich Philharmonics. In the live performances, he drowned Renée Fleming completely. Something the recording engineers, as expected, have fixed.

It´s worth noting that this disc also is available in a 2-disc version, the second disc labelled: Signature roles at the MET containing releases of old DECCA recordings of excerpts from Eugene Onegin, Capriccio, Otello, Thaïs and Rusalka. Combined with the upcoming Renée Fleming-opens-the-MET-season-with-three-designer-dresses-and-three-roles HD transmitted season opening galla next week, crossing the imaginary line again comes to mind.

The good thing is however, that the entire disc is available for free listening via Renée Fleming´s website.

Promotional video, with interviews and excerpts from the Munich live performances:

I'm confused how you could have found her superb in concert and disliked her in the recording of the concert. Isn't that contradictory? Wouldn't they be the same performance?

Well..technically it doesn´t have had to be from the same concert as she did three performances of the Ariadne + orcdhestral songs, but I don´t think this explains my difference in perception. I also found her superb as the Vienna Capriccio Countess.

That apart, I didn´t hear the Vier lezte lieder live and these are what most of the post is discussing. Furthermore, she was very much drowned out by Christian Thielemann live (his fault, I strongly suspect) so subtler phrasings were simply missed.

I guess that my fascination with Renée Fleming comes as much from her very stylish and elegant and expressive apperance on stage (including a concert stage). An aspect obviously lost on CD.

However, those who liked her previous disc Homage will most probably like this one too.

Very sorry to read this review Mostly (I'll get the CD anyway - just because).

I do disagree to some extent with your assertion that "most of the creamy beauty" is gone. To be sure, her voice is not the instrument it was but I would think that from your recent experiences you would still consider it an extraordinary instrument. It was certainly that in the Vienna Capriccio and I certainly hope it will be in the Thais and Russalka this year.

Your take on her VLL, however, is spot on. Ten years ago we heard her with the BPO under Abbado at Carnegie and that was astonishing at the time and remains to this day one of the half dozenn most satisfiyngly luxurious concert performances (of any vocal work) I've heard. The voice was at is most luxurious, the interpretation more interesting than in the Eschenbach recording, and the support and beauty of the BPO almost beyond description.

Two or three years ago with the Philadelphia, the beauty of the voice, while still extraordinary was diminished and the mannerisms you describe all too evident. Further, and somewhat surprisingly given their long relationship and the fact that they had just done 3 concerts together in Philadelphia,
there was a very noticible lack of cooridnation and timing with Eschenbach, with the Orchetra having numerous ensemble and intonation difficulties.

Yes I do agree with you. Probably should have been "diminished" instead of gone, but I´ve been listening to quite a lot of the "old" Renée Fleming with both Solti and Eschenbach lately, and the difference is just so obvious. I just thought the whole thing depressing. Esp. considering the absolutely glorious support she has from Thielemann here. I am certain she will be glorious in Rosenkavalier later this season - live..

Re: Abbado - perhaps even more depressing that Karita Mattila absolutely did not nail it on their VLL lieder CD.

Also depressing that the MET hasn´t been able to hire a better conductor for the upcoming Salome..

I think people are forgetting that she is almost 50 years old. She's not going to sound like she did 10 years ago. No singer would.

The most "depressing" thought for me is that in recent interviews she has actually started talking about retirement (at least from the opera stage).

Well, we are basically saying the same thing:
The real reason the state of her voice is "depressing" is that it indicates she may chose to retire from stage within not too many years...

Also the fact that she recently signed up with an agency to "explore her possibilities in other fields" points in that direction.

On second thought (or rather first listen) it does seem some of the cream has been skimmed of the top, as it were.

I do think she sounded "creamier" in the Vienna Capriccio. Since you heard her live in both Vienna in Munich, I was wandering if you observed a difference. (As I recall you did write that she was in "good voice" in Vienna).

Re: Mattila
A horrible missed opportunity. The two times I've heard her do in the VLL live she was outstanding, particularly with the BRSO a couple of years ago. Listening to the CD after these concerts you could only shake your head.

Renée Fleming was really drowned out by Christian Thielemann to a degree that detailed analysis of the voice is impossible based on the live performances - she did sound great in Vienna though.

I heard her singing VLL in Salzburg last summer with Daniel Harding conducting the WP. It is the only occasion I've heard her live and it was a big disappointment. She sounded quite like as on this CD.
I've only heard some bits and pieces from this new album but what I've heard is quite - with the exception of Es gibt ein Reich - terrible. What is more concerning than the lack of her "creamy voice" is the total lack of line in her singing. There are phrase after phrase not connected to each other.
I guess Thielemann knew what he was doing and did everybody a favour when he drowned her at the concert.
Back to Salzburg - Harding saved the concert by doing a marvellous Tod und Verklärung.

"phrase after phrase not connected to each other..."...

Could somebody recommend me ONE Fleming CD or DVD where I could hear a real vocal line, something else than "phrase after phrase not connected to each other..." ?

I think you've been a bit too harsh with her as far as the VLL go. I think she sings them good. She gives a personal touch that is recognizable and her silky voice brilliantly weaves through the orchestra.

What I find a bad taste, instead, is her choice to sing Ariadne! Her voice definitely doesn't fit Ariadne. "Es gibt ein Reich" sounds really bad. One should tell her that. Otherwise what's next? Bunnhilde?!

"Could somebody recommend me ONE Fleming CD or DVD where I could hear a real vocal line, something else than "phrase after phrase not connected to each other..." ?"

CD: Some of her early work with Solti is pretty fine with regards to phrasing as well.