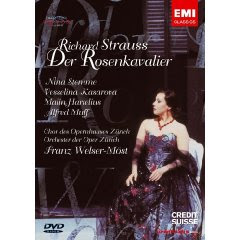 The staging is modern, but opposed to Robert Carsen´s superb Salzburg production from the same year I simply don´t understand Sven-Eric Bechtolf´s concept:

It begins in a white Japanese-style room with a few naked tree trunks and big windows making up one of the walls. The Marschallin and Octavian seem to be of the same age - possibly because Nina Stemme is a conceptionally rather young Marschallin.

For Act 2 we are in a kitchen, complete with traditionally clad chefs. Apparently Sophie is some sort of maid (but clad in a shining dress), who hides behind a door when Octavian arrives to present the Rose. Fitting into the surroundings, Octavian ends up hurting Ochs with a kitchen knife.

In Act 3 we are back in the initial white Japanese room, where a tent has now been erected and Ochs is served by servants wearing beetle masks. The Act 3 ensemble is a mixture of chefs, beetle servants, sevants with wings, skeletons and Mariandel in a fairy-tale princess dress with a half-moon shaped diadem...

Malin Hartelius is a superb Sophie, with ethereal high notes and convincing as the naive girl, who stands up to Ochs as well. Also Vesselina Kasarova is among the very best Octavians - beautiful, with an entirely unstrained voice as well as funny.

While the Marschallin is better suited to Nina Stemme than her heavy Wagnerian roles (read: Isolde), she still has a timbre I don´t take to and her voice has clearly deteriorated over the past few years. Furthermore, I see none of the worldly wisdom and varied acting of the great Marschallin´s here.

Franz Welser-Möst conducts a fine performance, but unfortunately the DVD competition is exceptionally strong - Carlos Kleiber and Semyon Bychkov both with the Vienna Philharmonics as well as Georg Solti from Covent Garden.

For a modern production of Rosenkavalier, Robert Carsen´s 2004 Salzburg production is strongly recommended. For a traditional Rosenkavalier one of the Carlos Kleiber-conducted Otto Schenk productions (I´d personally prefer the one from the Vienna State Opera) or the Georg Solti-conducted production from Covent Garden are the top available choices.