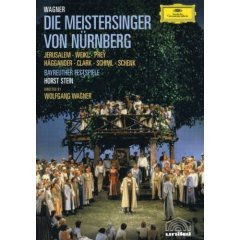 Who is more likely to know Richard Wagner's Meistersinger conception, than his grandson, Wolfgang Wagner, director of this production? Think again..

Apparently Wolfgang Wagner was keen on avoiding any discussion of the nationalistic aspects of Meistersinger- therfore he emphasized the down-to-earth folkloristic aspects of the people in this staging. The sets are traditional, half-naturalistic, minimalistic and dull, depicting the traditional Meistersinger locations as written in Richard Wagner´s libretto with the singers in traditional costumes.

Wolfgang Wagner is known as a director who expects his singers to be able to move on a stage and starts his work from there. Which, in theory, sounds reasonable, especially since his knowledge on Richard Wagner´s works is immense. However, intellectual analysis rarely makes for engaging theater unless backed up by hands-on stage direction or at least exceptional sets. Or an exceptional conductor. Or any combination of the above. In fact, this seems to be the main take-home message of this staging.

For once, we have a young, good-looking an vocally strong Walther in Siegfried Jerusalem. To nail it completely, he´d probably have had to be on pitch and slightly less stiff.
For some reason he wants Marie-Anne Häggander´s rather ordinary Eva. She has the slightly less ordinary Manfred Schenk as her father.
Bernd Weikl is a rather young Sachs and while he is in fine voice, he is not the revelation some make him out to be. Eyeing the DVD competition, I´d still prefer James Morris, from an over-all interpretative point of view. Graham Clark makes a vivacious and entertaining David.
Hermann Prey was a surprise casting as Beckmesser and he is the stand-out of this production. He tones down the malicious and ridiculous aspects of the part and is simply a lonely man making some unwise decisions, though I didn´t find his singing quite as superb as rumoured.

While Horst Stein is a fine conductor, Meistersinger is outrageously difficult to lift off, and he doesn´t quite make it. It just takes listening to Solti, Barenboim or Thielemann among recent conductors to hear the difference between a good and a great Meistersinger conductor.

The premiere of this staging was in 1981, 5 years after Patrice Chéreau´s Ring. Wolfgang Wagner should have known better and hired an outsider to do this production. He wasn´t even close to doing that as he also staged the suceeding Bayreuth production of Meistersinger. At least at that point he had the sense to have the two top-Wagnerians Daniel Barenboim and Christian Thielemann conduct it...

I´d still recommend the Metropolitan Schenk production as the top choice of a Meistersinger DVD.