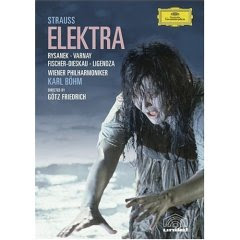 This is not an opera performance, but a film directed by Götz Friedrich. The gloomy background is that of rain continuously pouring down in a courtyard lined by ghostly buildings, the ruins of a palace. Elektra apparently lives in this mix of ruins, Greek pillars, concrete walls, rain, blood and mud. There is a stylish simplicity not unlike the ancient Greek tragedies to this film. When Chrysothemis enters the courtyard, the rain stops. When Orestes takes on power, both Elektra and Chrysothemis are excluded. As Götz Friedrich states: Those, who are dismissed by the new ruler, are often those, who most believed in him. And idea also applied by Konwitschny in more recent productions.

A wilder film than Götz Friedrich´s previous Salome, which tended to be a bit polished. The major down-side to this film is the usual: The lip synchronization. Plust it does tend to be a bit static.

Leonie Rysanek, 54 years old at the time of this recording, never performed this role on stage (but was a yet unsurpassed Chrysothemis) and brought all her formidable dramatic presence to this part. (In)famous for her sharp intonation, this was only occasionally audible here. While she doesn´t have the steely voice of Birgit Nilsson or the power of an Astrid Varnay in her prime, she is still a mightily impressive Elektra.
I´ve always thought that if I had been attending opera performances in the 60´s-70´s Leonie Rysanek, sharp or not, would have been my favourite soprano, Nilsson and everyone else included. Pre-1980 Gwyneth Jones would have come in second..

The formidable Astrid Varnay is a Klytemnestra in decay and she completely dominates her scenes. That her voice is in decay as well, is less important in this part. Catarina Ligendza is a young Chrysothemis. Although not quite at the level of her two formidable companions, she delivers a more than honorable performance.

Now, Orestes, in my opinion, is a part for a Wotan-voice, not a lyrical barytone. Though Dietrich Fischer-Dieskau is an artist of such high standards that he doesn´t drop beneath a certain (high) level, I still think he is stretching it with these parts, his Wotan included.

The second DVD contains a fascinating documentary on the creation of this movie complete with rain machines and dry ice. Most interesting, however, was the part including Karl Böhm, who is seen in rehearsal with the Vienna Philharmonics only a few months before his death at a point where he seriously looked in no shape to conduct at all, 87-year old and very frail.

I agree, I agree !
You do seem to hit the nail on the head with your reviews.
This pair of DVDs has long been in my collection, and, whilst not always being a lover of the Friedrich approach to operas he’s tackled, I find this one works well.
Astrid Varnay – yes, the voice is by this time on the way out, but she is still a force to be reckoned with. I saw her a couple of times towards the end of her career (The Kostelnicka in Jenufa, e.g.) and you could not take your eyes off her on stage. Magnetic.
Fischer-Dieskau – again, yes, I agree. You need a bass-baritone of the Wotan, Hans Sachs type really. But my favourite on record would be Paul Schoeffler, and I think he was baritone.
Your comment about Rysanek is interesting. She was in her day a dynamo. She lived for the theatre and could be seen, especially in Vienna, in a wide variety of roles. I saw her only once – Tosca. And when Scarpia gets stabbed in Act 2, my goodness was he ever dead! Great stuff. Here as Elektra she pushes the envelope a touch, but it works. Dramatically convincing, if not as powerful as Nilsson – but then who was ? More importantly, she conveys the sadness, desperation and the feeling of hopelessness Elektra suffers, as well as her innate desire for vengeance better than many. (As did Inge Borkh – my favourite Elektra)